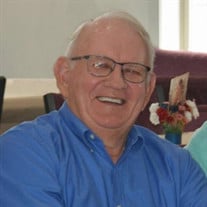 Ziedonis “Zeke” Plorins, 81 of Clear Lake, died Thursday, September 30, 2021, at MercyOne North Iowa Hospice in Mason City. A memorial service will be held at 2:00 p.m. Friday, October 15, 2021, at the Clear Lake Evangelical Free Church, 1310 US 18, Clear Lake, with Rev. Tom Gerdts officiating. Visitation will be held one hour prior to the service at the church. Zeke Plorins was born in 1940 in Latvia, a small country on the Baltic Sea. When he was just four years old, his family fled from the advancing Russians and sought shelter in Germany. Years later, Zeke would recall those frightening times. He described traveling in a convoy of refugees and sleeping in the countryside outside the cities to avoid the bombing campaigns. He remembered his father teaching him to recognize the slow lumbering sounds of the Russian bombers and the fast high-pitched sound of the American ones. After the war they remained in Germany for five years living in a Displaced Persons camp, seeking an American sponsor to help them emigrate. They were finally able to move to the United States in 1949 with the help of a rancher in Missouri. When they arrived by ship to the United States, their first port was in New York City and Zeke remembered seeing the Statue of Liberty.  They then traveled by ship to Louisiana, where they were processed and picked up by their Sponsor family.  They lived and worked on a farm in southern Missouri for two years, and then moved to Cedar Falls, Iowa.  Zeke often talked about how God kept him and his family safe through those difficult times, and how he was confident in God’s protection going forward.  Zeke grew up in Cedar Falls, and went to college at what is now the University of Northern Iowa.  He met his future wife, Nancy, in 1962 and they married in 1965.  After living in Nashua, Iowa for two years, they moved to Clear Lake and raised their two sons.  Zeke was a high school shop teacher and wrestling coach for several years.  He later worked various jobs in industry, using his strong mechanical/engineering skills to solve problems, make tools, and build machines.  Zeke could literally fix anything and loved to create unique solutions to any mechanical problem. As a youth, he was athletic and excelled at wrestling, finishing second at State Wrestling for his weight class.  As he grew up, he raced snowmobiles in winter and summer (“grass drags”), and even participated in a snowmobile race from Winnipeg to St. Paul.  He also was a water skier, downhill snow skier, motorcycle enthusiast, and could repair any boat or car engine.    For years, Zeke and Nancy hosted family vacations in Minnesota every summer. They would play golf, take boat rides, have campfires and play with their grandkids down at the beach. Zeke loved his grandchildren dearly and those vacations created some of our family’s happiest memories. Zeke was a member of Clear Lake Evangelical Free Church, where he served as Head Usher for several years. He had a great sense of humor and could always make people laugh with his witty insight. He loved to play golf and was a member at Veteran’s Memorial Golf Club in Clear Lake. He played in the Men’s League, and Nancy and Zeke played in a Couples League each week. His license plate frame said, “I’d Rather Be Golfing” and that was usually true for him! In casual conversation he would often say, “That reminds me of golf…” and then go on to explain how your experience was just like what happens on the golf course. Nancy and Zeke were devoted to each other and said “I love you” every day. Zeke was a wonderful husband and father, much beloved by his family and friends. He will be greatly missed. Zeke is survived by his wife, Nancy (Carlton) Plorins; sons, Jim (Diana) Plorins and David (Tracey) Plorins; grandchildren, Matthew (Frankie) Plorins, Nicholas (Shauna) Plorins, Anna Plorins, Emily Plorins, and Isaac Plorins; and brother, Lauris “Larry” (Sue) Plorins. He was preceded in death by his parents, Eduard and Otilija (Zelma) Plorins.

The family of Ziedonis "Zeke" Plorins created this Life Tributes page to make it easy to share your memories.

Send flowers to the Plorins family.