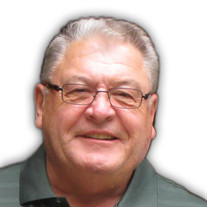 Bill Witt, 73, passed away Saturday, September 25, 2021 at St. Mary's Hospital in Rochester, Minnesota. A musical celebration of life will be held Thursday, September 30th at the Columbia Club, 551 S. Taft Ave., Mason City, from 4:00 pm until 7:00 pm. Bill was born October 7, 1947 in Mason City, Iowa, the son of Harold and Genevieve (Fitzgerald) Witt. Bill was the first grandchild of both the Witt's and Fitzgerald's. During Bill's early years you could find him working for various farmers in the summertime then off to school in the fall. During high school, he participated in three sports; football, wrestling, and track. They went to state track two years, with his best time 10.4 seconds in the 100 yard dash. After high school graduation (Class of 1966), Bill spent the summer working for Crane Pole Structures then on to NIACC for fall classes, graduating in 1968. He arranged all his classes in the morning so he would be able to work at Sieg's Auto parts Store every afternoon. After graduation Bill married his high school sweetheart, Nancy Dow, on June 22, 1968, while still working full time at Sieg's. In August, Bill was offered the sales position for Sieg's in Decorah, IA. Bill often said this was the most rewarding job of his life. Bill and Nancy's two children were born in Decorah, a son named Paul Matthew and a daughter named Christine Rae. After four and a half years, in 1973, Bill bought Smokey's Shell Station back home in Nora Springs, and it became known as "Bill's Friendly Service." After another four and a half years, Bill sold the station to Kum and Go. He then worked for the Shell distribution office for 10 years. The rest of Bill's working life was for Butler and Curtis Oil for 22 years as a plant manager, retiring in December of 2006 due to health reasons. After good news and bad news on Bill's health, in 2010 Bill and Nancy began spending their winters in Tucson, Arizona. Throughout Bill's life, he was president of the NS-RF booster club, a councilman for the City of Nora Springs, and served a term as president of the Antique Automobile Club (NIVA) in Mason City, Iowa. He spent many hours on woodworking projects for his family, enjoyed playing golf with friends in both Iowa and Arizona, was a big fan of Willie Nelson, and loved his classic cars. Bill is survived by his wife Nancy (Dow), Nora Springs; sons, Paul (Heather), Midland, MI and their sons, Colin of West Lafayette, IN and Nathan of Colorado Springs, CO; daughter, Christine Witt of Steven's Point, WI. Bill is also survived by Kim (Solum) Kuhn and her husband, Steve, the daughter of very special friends of Bill and Nancy, the late Carol and LuAnn Solum of Decorah who Bill and Nancy consider their adopted daughter; his siblings, Barbara (Dennis) O'Donnell of Mason City, Jim (Pam) of Surprise, AZ, and Jolene (David) Juhl of St. Ansgar; sister in law, Colleen (Dow) and her husband, Mike Brallier of Nora Springs. He is also survived by many, many aunts, uncles, nephews, nieces, and cousins. Bill was preceded in death by his parents, Harold and Genevieve Witt; both sets of grandparents, William and Myrtle Witt and Bernard and Mary Fitzgerald; cousin, Bruce Billings; brother in law, James Brallier; and many aunts and uncles. Please join Bill's family on Thursday, September 30, where they will greet friends and relatives at the Columbia Club, 551 S. Taft Ave., Mason City from 4:00 pm until 7:00 pm for his celebration of life. Bill really wanted this time to be spent enjoying his favorite music, which included everything except rap and hard rock, while sharing memories with one another of the good times.

The family of William B. "Bill" Witt created this Life Tributes page to make it easy to share your memories.

Send flowers to the Witt family.