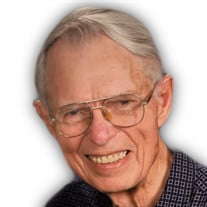 William "Bill" Dean Otterman, 97, of Clear Lake, Iowa died Monday, March 28, 2022 at Oakwood Care Center, Clear Lake, IA. A Funeral Service will be held 10:30 am, Saturday, April 2, 2022, at Ward-Van-Slyke Colonial Chapel, 310 1st Ave N, Clear Lake, IA, with his son, Pastor Kent Otterman, officiating. Burial will take place in Clear Lake Cemetery. Visitation will be held from 5:00 to 7:00pm on Friday, April 1, 2022 at Ward-Van-Slyke Colonial Chapel 310 1st Ave N, Clear Lake, IA. Memorials may be directed towards Zion Lutheran Church, Clear Lake, One Vision, Clear Lake, or NIVC, Mason City. Bill was born on October 2, 1924 in Des Moines, Iowa the son of Harold B. and Anna E. (Miller) Otterman. He grew up in Traer, Iowa, raised by his paternal Grandparents Willis and Margaret Otterman. Bill had fond memories of his childhood with his 0grandparents whom he loved dearly. He graduated in 1942 from Traer High School known to be an outstanding athlete. Bill earned a B.S. degree at the University of Iowa and Physical Therapy degree at the Medical College of Virginia, Richmond VA. During college he enlisted in the U.S. Navy May 6, 1943 in Minneapolis getting an Honorable discharge November 22, 1945 in Boston, MA. Bill was married to Charlotte Thompson in Mason City, and blessed with two children Kirk and Kent. They were later divorced. In 1997, Bill and Joan Johnson married. Both had worked at Handicap Village in the 1970’s. They were “Snow Birds” for seven years before making Clear Lake their permanent home. In his career in Physical Therapy, he was known as deeply caring in helping those who came to him for help. This led to concerns for future life for the children with permanent disabilities which therapy could not erase. They faced a life of mere existence. The high point of his career was to be among the small group of original founders of Handicap Village, that became Opportunity Village, in Clear Lake, later turning into “One Vision”. Bill loved this quote “Where those disabled now REALLY LIVE” In his free time Bill enjoyed golfing, bowling, and playing pool. In Bill’s younger years he played football and basketball in High School. He was a fan of the Iowa Hawkeyes, Iowa State Cyclones and the Minnesota Twins. He loved ballroom and square dancing, enjoyed Navy Shipmate Reunions and membership in Clear Lake VFW. Bill believed in the reality of Jesus and tried to live his beliefs by helping others and spreading joy through humor. Those left to cherish memories of Bill are his children, Kirk of Alto, GA and Kent (Cathy) of Emmons, MN; granddaughter, Angela (Robert) Hoffman, of Albert Lea, MN; grandson, Joshua (Anna) and their two sons, Ender, and Iden of Hanlontown, IA; niece, Gayle Linkletter of Cincinnati, OH; nephews, Scott Linkletter of Prosper, TX, and John Linkletter of Beverly, MA; step-children, Randy and Beth Johnson of Clear Lake, Stu and Julie Oltrogge of Clear Lake, Jackie Wilson of Des Moines; step-grandchildren, Abby (Tyler Burhenn) Wilson and their son Luca Burhenn, Hannah Wilson, Emily and Dave Haugerud and son Waylon; as well as close friend John Kjeldgaard. Bill is preceded in death by his wife, Joan; his parents, and his sister Joan Linkletter. For those unable to attend the service will be recorded then uploaded to his obituary page on ColonialChapels.com

The family of William Dean "Bill" Otterman created this Life Tributes page to make it easy to share your memories.

Send flowers to the Otterman family.