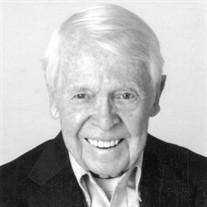 William D. (“Oz”) Osmundson, passed away in his Clear Lake home November 25, 2021, at the age of 92. A private family Mass of Christian Burial will be held on Saturday, December 11, 2021, at St. Patrick’s Catholic Church, Clear Lake, with Rev. Josh Link officiating. A Celebration of Life will be held at a later date, during the 2022 sailing season. Oz was born November 1, 1929 in Forest City, IA to Floyd W. and Lucele (Kelly) Osmundson. The family soon moved to Mason City where Oz spent his boyhood years. He graduated in 1947 from Mason City High School. In the fall of 1947, he enrolled at Grinnell College and enlisted in the United States Army in 1948 during peace-time. He was released in 1949, and returned to Grinnell for his sophomore year. In 1950, he transferred to the University of Iowa in Iowa City where he could join the Air Force ROTC, enabling him to finish college. He graduated from the university in 1953, with a BA in Economics. From Iowa City, he moved to Rock Island, IL joining the accounting firm of McGladrey, Hansen, Dunn & Company (now called RSM). He was awarded his CPA certificate in 1954, and made partner in 1956. The firm’s modern era of consulting began in 1966, and at McGladrey, Oz was dubbed the “father of the consulting practice”. Oz was someone who won the partners’ confidence, maintained the culture of the firm and recruited future leaders and people who were committed to helping clients succeed. He was a straight arrow in his profession, even refusing to take on some “questionable” clients. He continued his employ with McGladery until 1989 and was self-employed thereafter. While at UI he met his future wife, Fran Swartz from Iowa Falls, and they were married in 1954 in Iowa Falls. They made their home in Rock Island, IL where they lived for 53 years. In 2007, they moved to Clear Lake, making Oz’s childhood summer home their permanent residence. He served on various boards including Rock Island Chamber of Commerce, Rock Island Community Chest, Quad City Graduate Center and Rock Island Public Library. He thoroughly enjoyed attending the Quad City Symphony and various operas in Chicago with his wife. He was a member of St. Pius X Catholic Church – Rock Island, St. Patrick’s Catholic Church – Clear Lake, Order of Artus (Honorary Economics Fraternity), Phi Beta Kappa (honorary fraternity), Phi Kappa Psi (social fraternity), Clear Lake Yacht Club, and a mentor at Clear Creek Elementary School in Clear Lake. During his life Oz had numerous friends and acquaintances from all walks of life and enjoyed many activities. In his younger years he was a scout, achieving the rank of Eagle Scout. He loved the water and was involved in sailing his X-boat named the Bill-O-Wee, on Clear Lake in his youth and boating on the Mississippi with Rock Island friends. He wrestled both in high school and at Grinnell College. He enjoyed duck and pheasant hunting, snow skiing with family in Colorado, golfing, his monthly poker group and playing cribbage with his friends. Being an accountant, he was always good with numbers, but he also had a creative side. When called upon to do so, he could quickly compose a rhyming poem or limerick for most occasions. Throughout their years Oz and Fran were able to do some traveling in Europe, bareboating in the British Virgin Islands and connecting with relatives in Norway. Some of his more memorable vacations were time spent in Grand Cayman and the Greek Isles as well as the many short winter visits to Mexico with friends. Oz is survived by wife Fran of 67 years and sons Brad (Margaret), Bill (Linda) and Kurt; grandchildren Christian (Kylie), Jon (Lizzie), Erik, Elizabeth, Annelise and Zachary; and nieces and nephews. Oz was preceded in death by parents, Floyd and Lucele and sister Jo Christian. If you wish, memorials may be directed to Clear Lake Sailing Center (103 Main Ave, PO Box 29, Clear Lake, Iowa 50428) St. Patrick’s Catholic Church (1001 – 9th Ave S., Clear Lake, Iowa 50428) or your favorite charity. A very special Thank You to the Hospice nurses and friend caregivers that enabled Oz to stay at home. “Life’s journey is not to arrive at the grave safely in a well preserved body. But rather to skid in sideways, totally worn out, shouting…what a ride.”

The family of William D. "Oz" Osmundson created this Life Tributes page to make it easy to share your memories.

Send flowers to the Osmundson family.