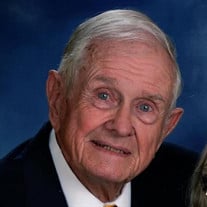 On May 24, 2021, William L. "Bill" Nicholas, of Clear Lake, finished an amazing journey and immediately embarked on an even greater one. Bill loved life and lived it zealously for over 91 years. A farmer for over 80 years in North Iowa, and 40 years in southern Florida, he pursued many other interests including: sailing, flying, music, traveling, and reading. In his spare time he started a bank in Clear Lake and was a founding board member of Guardsman Life Insurance Company in Des Moines. By far the most important thing to Bill was his family starting with his wife, Mary Lou. They recently celebrated their 70th wedding anniversary in Florida. He was instrumental in helping his three boys and five grandchildren get established, not only in life, but in their chosen professions. Their love for him was evidenced by the fact that they all remained in Iowa. All three boys and four of his five grandchildren live within two miles of Bill and Mary Lou’s home on north shore in Clear Lake. Bill was born Oct. 14, 1929, in Hampton, Iowa, the son of William and Viola (Folkers) Nicholas. In 1930 they moved from Allison, Iowa to a farm near Clear Lake, where the Mason City airport is now located. In 1941 they moved to 60 Crescent Drive, in Mason City. He met Mary Lou Ogden at the Mason City High School in 1945.They were married on Dec. 17, 1950, at the old Methodist Church, which was located across from the Cerro Gordo County Courthouse. Three children were later born: William Reed, in 1952, Gregory Cole, in 1955 and Jeffrey Hall, in 1958. A graduate of Mason City High School, class of 1947, Bill graduated from the University of Iowa in 1951 with distinction. Bill was a member and past president of Phi Gamma Delta, active member of Clear Lake United Methodist Church and Christ by the Sea Methodist Church in Vero Beach, Fla., where he sang in both choirs and regularly played his trumpet. He was a former president and multiple Paul Harris fellow in the Clear Lake Rotary and past commodore of the Clear Lake Yacht Club. He was also very active in Cub Scouts and Boy Scouts, serving as Cubmaster for Pack 203 and Assistant Scoutmaster of Troop 17. Bill loved playing his trumpet and over the years played in the Mason City High School Band, the University of Iowa Marching Band, the Mason City Municipal Band, the Clear Lake Municipal Band, the Melbourne, Florida Municipal Band, The New Horizons Band, the Nonsemble, the Vero Beach Chamber Orchestra, praise bands at the Clear Lake and Vero Beach Methodist Churches, and probably others that we can’t recall. Bill is survived by his wife, Mary Lou, of Clear Lake; children, William (Barbara) Nicholas, Gregory (Julie) Nicholas and Jeffrey (Jo Ann) Nicholas, all of Clear Lake; grandchildren, Carolyn (Gabe Haugland), Greg Jr. (Erin Marie), Emily (Cory Gerdts), Andrew (Paige), all of Clear Lake, and Victoria, of West Des Moines; great-grandchildren, Grace and Nick Haugland, Bella, Cece and Liam Nicholas, Landry, Avi, and Baby Gerdts, Estelle and William Nicholas; and many nieces and nephews. He was preceded in death by his parents; and sisters, Idella Dukes and Bonnie Schick. Funeral services will be held at 1 p.m. on Friday, May 28, at the Clear Lake United Methodist Church, 508 2nd Ave. N., Clear Lake, with Rev. Tom Gerdts officiating. Masks will be required. The funeral will be live streamed on the Ward-Van Slyke Colonial Chapel Facebook page. Burial will be at Clear Lake Cemetery, and a reception will be held at the Clear Lake Yacht Club following the committal service. Visitation will be held from 4-6 p.m. on Thursday, May 27, at Ward-Van Slyke Colonial Chapel, 310 1st Ave. N., Clear Lake. In lieu of customary remembrances, Bill’s family suggests memorial contributions to a charity of one’s choice. A Celebration of Life for Bill’s friends in Vero Beach will be held this coming winter.

On May 24, 2021, William L. "Bill" Nicholas, of Clear Lake, finished an amazing journey and immediately embarked on an even greater one. Bill loved life and lived it zealously for over 91 years. A farmer for over 80 years in North Iowa, and... View Obituary & Service Information

The family of William L. Nicholas created this Life Tributes page to make it easy to share your memories.

Send flowers to the Nicholas family.