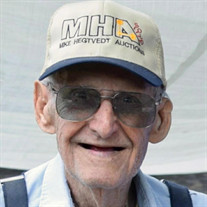 Walter Asche, 93, passed away Thursday, November 26, 2020, at Heritage Care Center, Mason City, IA. Family will be holding a private funeral service. Burial will take place at Elmwood St. Joseph, Mason City, IA. Walter was born on December 13, 1926 in Britt, IA, the son of Bernard and Winifred (Packard) Asche. He attended Britt school until he began farming for his father, later on being drafted into WWII being stationed in Germany. On February 5, 1951, Walter married Catherine Crowley, and to this union five children were born. He farmed for ten years before working for Armour until his retirement. Collecting silverware was a hobby that Walter had, even had a set that lasted through a tornado. Amongst being a collector he enjoyed hunting, fishing and gardening were all more ways he could spend his time. Most importantly, Walter loved his family and would do anything for them. Walter is survived by Catherine Asche; children, Julie (Chris) Rye, Teresa (Brad) Tietjens, and Scott (Donna) Asche; 12 grandchildren; countless great-grandchildren; sister-in-law, Phyllis Lau; as well as numerous nieces and nephews. Walter is preceded in death by his children, Christine Campbell, Chuck Asche; his parents; one brother; two sisters; and one step-sister.

The family of Walter Charles Asche created this Life Tributes page to make it easy to share your memories.

Send flowers to the Asche family.