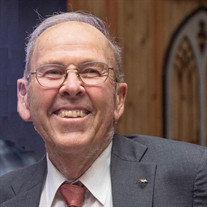 (Vernon) David Lawyer passed away suddenly on his farm on December 31, 2020.  A celebration of David's life will be 1:30 p.m Saturday, July 10, 2021 at Bethel United Methodist Church, 503 South East Street, Manly IA 50456. David often wore plaid, so please wear plaid in his honor, and NO neckties, please! We thank you for your prayers and kindness through this time.  Memorials may be directed to Bethel United Methodist Church, NIACC or Iowa State University Scholarship Funds or Lime Creek Nature Center in David's honor. Born to Courtney and Leona (Benjegerdes) Lawyer on March 26, 1936, David's entire life was deeply connected to his family and the farm. Even at 6 years old, David wanted to be a farmer.  He attended Danville rural schools and graduated from Manly High School in 1954.  David then went to Iowa State College where he graduated in 1958 with a degree in Agriculture and was commissioned into the Army as a Second Lt.  Most important from his time at ISU though was finding his sweetheart who would be by his side for the next 62 years. David married Caryl Marsh on October 19, 1958.  Except for David's service in the Army, David and Caryl lived their lives building and adapting their farm and raising 4 children Susan, Kimberly, Ted and Jean.  Through David's 42 active years of farming from 1958 through 2000, he constantly studied and tried new crops and techniques from sugar beets, flax, hogs, cattle, soil conservation, water quality and even selling Allis Chalmers implements but no feathers, right Mom? David built out a woodworking shop in his "retirement" where he could spend his energy making and creating constantly.  There was always at least 2 projects in process along with taking care of his farm. David was known through many church and service organizations as the guy who just got stuff done.  From woodworking projects that helped our church look beautiful or function better and thousands of toy cars for mission projects, to helping connect children in need and toys to the Shriner's Hospitals, David just did and went.  David was a lifelong member of Bethel United Methodist Church in Manly always giving freely with his time and talents.  David also continued his father's work of supporting Worth County Fair and was deeply honored to see his cattle brand, Cap O added to the statue at the Worth County Fairgrounds. David was also devoted to his Masonic Lodge for over 64 years an added Shrine fellowships that built many friendships and service to others around the world. David's most important legacies though will be his deep faith in Christ, his unconditional love for his family and his constant effort to be moving a project forward. He passed away on his farm with his coat and shoes on ready to go meet the day. David learned his lessons of perseverance from his grandparents and mother on the farm as his father passed away when he was 8.  David is preceded in death by his parents Courtney Hulbert Lawyer and Leona Benjegerdes Lawyer and his brother Courtney Merle Lawyer and his brother in law John Lorin Marsh. David is survived by his loving wife Caryl.  His children Susan(Mike) Whitson of Cedar Falls, Kimberly(Dennis) Baldwin of Parker, CO, Ted, (Lori) Lawyer of Ventura and Jean(Karl) Schilling of Manly, IA.  Grandchildren Jessica(Brian) McWilliams, Tom Whitson, Christine(Brent)Spradling, Hannah Baldwin, Remington(Leslie) Lawyer, Lauren Schilling and Sydney Schilling. Great Grandchildren Seamus McWilliams, Kiernan McWilliams and Baby Spradling expected in May. Step-Grandchildren: Brittany Coolican and Ericka (Dylan) Nordman.

The family of David Lawyer created this Life Tributes page to make it easy to share your memories.

(Vernon) David Lawyer passed away suddenly on his farm on December...

Send flowers to the Lawyer family.