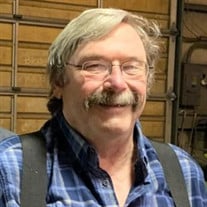 Timothy William Jones, 64, of Ventura, died Wednesday, December 1, 2021, at MercyOne North Iowa Medical Center in Mason City. A private graveside service will be Monday, December 6, 2021, at Concord Cemetery in Garner with Rev. Will Hunsaker officiating. Visitation will be held from 3:00-5:00 p.m. Sunday, December 5, 2021 at Ward-Van Slyke Colonial Chapel, 310 1st Ave. N., Clear Lake. Tim was born September 21, 1957, the son of Wendell and Myrleen (Carpenter) Jones in Clarion. He married Diane Eggerth on June 11, 1994, in Ventura. A graduate of Belmond High School, class of 1975, Tim enlisted in the United States Navy. He was stationed on the Los Alamos dry dock as a crane operator. During his service he had the opportunity to travel to many countries but thoroughly enjoyed his time living in Scotland the most. Following an honorable discharge, he returned home and drove a semi-truck across the country for several years. In 1983, he earned a welding diploma from North Iowa Area Community College in Mason City. He later worked at IMT in Garner as a welder before starting his own welding and repair shop, Tim’s Welding and Repair, in Ventura until retirement. Tim was a member of the Ventura Volunteer Fire Department and First Responders for several years. He enjoyed collecting and shooting guns, riding motorcycles and spending time with his many dogs over the years. More than anything, he cherished time spent with family. He was a wonderful, loving husband, father, grandfather, son and brother. Tim is survived by his wife, Diane Jones of Ventura; children, Jeremy (Maddi) Ashland of Ventura, MiKayla (Matt) Bell of Mason City and Megan Jones of Ventura; grandchildren, Mason, Jayden, and Milo Ashland, Alyssa Bergantzel, Logan, Audrey and Hailey Bell; mother-in-law, Verna Mae Eggerth of Garner; brothers, Kim (Lorrie) Jones of Redfield and Mike (Julie) Jones of Charles City; aunt, Bonnie Sorber of Clear Lake; siblings-in-law, Dave (Pat) Eggerth of Forest City, Larry (C.J.) Eggerth of Mason City, and Gary (Donna) Eggerth of Clear Lake; and many nieces, nephews, and cousins. He was preceded in death by his parents; son, Christopher Ashland; sister-in-law, Nancy Eggerth; and father-in-law, Walter Eggerth.

The family of Timothy William Jones created this Life Tributes page to make it easy to share your memories.

Send flowers to the Jones family.