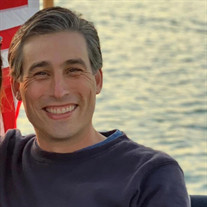 On Thursday, June 10, 2021, Thomas James Zanios III, loving husband, father, son, brother, friend, and colleague, passed away at the age of 41. Thomas was born on January 17, 1980, in Mason City, Iowa to Jamie and Nancy (Smythe) Zanios. Even as an infant, Thomas had a seemingly endless supply of energy and enthusiasm for being around people that stayed with him throughout the rest of his life. His parents claimed their newborn needed little to no sleep, preferring instead to stay up and socialize; a claim echoed some 40 years later by his high school sweetheart and wife, Emily (Becker). Growing up, Thomas spent summers in Clear Lake, Iowa where he developed a passion for sailing from a young age. He was a focused, fierce competitor for Clear Lake Yacht Club, traveling to lakes around the Midwest for regattas after he successfully persuaded his devoted mother to learn to navigate two lane highways and narrow boat ramps with a boat trailer hitched to the back of the car. His love of sailing set him on his life course, as he attended Tufts University where he and his sailing teammates forged lifelong friendships on the nearly-frozen Mystic Lake during early spring sailing practices. After college, Thomas went on to work in New York, Miami and, ultimately, Westport, CT where he was a founding partner of Gemspring Capital, a private equity firm. Though there is much about Thomas that is unforgettable, his family and friends will most remember him for his ready smile and genuine joy for life. No matter the occasion, Thomas took the experience to the next level. He led the charge of an attempted (and failed) cow tipping on the eve of his wedding and once literally “danced his pants off” by splitting the seam of his pants on a dance floor. He always ordered two extra dishes for the table when dining out, and whether that was really to taste everything on the menu or just to push his parents’ buttons, we will never know. Thomas found a way to connect with everyone around him. From the CEO of a billion-dollar company to a server at a local restaurant, he would ask you about your life and genuinely wanted to know your story. From Iowa, to Boston, to Miami, to New York, to Rhode Island, and many places besides, Thomas made – and kept – friends who were always welcome at his home and by his side. His relentless pursuit of the perfect golf swing was matched only by the number of friends he made on the course and the apparel he collected off of it. Many of these same friends could often be found with him on one of his many adventures; from out of bounds skiing out West to kite surfing in the Atlantic, he was always ready to try new things and make new memories. Thomas happily shared his love of daring pastimes with his siblings in childhood and then with his daughters, who credit their budding wakeboarding and skiing hobbies to Dad. Because most of all, Thomas was a loving, dedicated father to his two strong daughters, Eliza and Maisie. Though Thomas’s time on this earth was far too short, it is with his children that he leaves his deepest legacy. From him, they got their intelligence and quick wit, their bravery and sense of daring, their curiosity and a tenacious work ethic. They have an excellent sense of humor, a love of music, and a genuine interest in and appreciation for the people and world around them. His wife will miss his smiling eyes, his calloused hands, his thorough logic, and his heavenly foot massages. His children will miss his bedtime lullabies, his swimming pool antics, his silliness, his expertise in all things griddled and grilled, and his unwavering adoration. All who knew him will miss his infectious energy and the fun he brought to any given day. Thomas lived his life head on and pulled everyone along with him. He inspired, encouraged, and challenged us to take advantage of every opportunity and live life to the fullest. Though we will miss him here every day, we know that he is onto his next big adventure, and we can’t wait to hear about it when we see him again. Thomas is survived by his wife, Emily, and their daughters, Eliza and Maisie; parents Jamie and Nancy; sister Whitney (Andrew) Zanios and brother Parker Zanios; in-laws Tim and Sherry Becker; brothers-in-law Ben (Tabitha) Becker and Zach Becker (Casey Sweeney); nieces Willa, Mem, Savannah, and Alaina; nephews Otto and Gus; and man’s best friend Finley. Thomas was predeceased by his grandparents, Tom and Tula Zanios, and William and June Smythe, and his uncle, Tom Zanios Jr. There will be a private funeral service for the family. Friends are welcome to attend the visitation on Thursday, June 17, 2021, at Ward-Van Slyke Colonial Chapel, 310 1st Ave. N., Clear Lake, IA from 4-6 p.m. or join the family on Friday, June 18 at the Clear Lake Yacht Club, 103 Main Ave., from 2–4 p.m. There will be a memorial on the East Coast at a later date. Donations in Thomas’s honor may be made to the newly formed Thomas J. Zanios III Foundation (P.O. Box 99, Mason City, IA 50402) that will provide support for causes important to Thomas and his family, or to a charity of your choice in his memory.

The family of Thomas James Zanios III created this Life Tributes page to make it easy to share your memories.