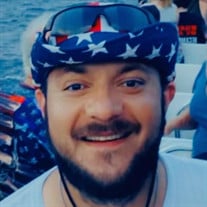 Thomas Zachary Jones, 35, of Mason City, died Sunday, February 13, 2022 in Mason City. A Funeral service will be held 10:30am Saturday, February 19, 2022 at Hogan Bremer Moore Colonial Chapel, 126 3rd St. NE, Mason City. Burial will follow in Elmwood St Joseph Cemetery, Mason City. Visitation will be held Friday evening, February 18, from 5:00 pm until 7:00 pm at Hogan Bremer Moore Colonial Chapel and will resume one hour prior to Tom’s service at the funeral home on Saturday. A lifelong resident of Mason City, Thomas Zachary Jones was born on February 18, 1986 to parents Thomas and Susan (Gomez) Jones. He grew up spending countless hours alongside his siblings, cousins, and extended family, where he developed a love of family at a young age that would accompany him throughout his entire life. Tom attended Mason City High School and played on Mason City Mohawks football team. He graduated in 2004 and then enrolled in NIACC’s welding program. Family was always a mainstay in Tom’s life and on September 7, 2018 he was united in marriage to a lifelong friend, Nichole Wiebrand. He was the proud father to Tucker, Xavier, Harlow, and Jaxtyn. He had many hobbies and was never afraid to add another to the list. He loved woodworking and taking his metal detector out, but he was also a great cook and loved preparing food for family and friends, whether it be a gourmet meal in the house or grilling at the campgrounds. He loved the outdoors in general and particularity loved camping, fishing and boating. Tom most recently found a passion for collecting coins and was always eager to sift through pocket change in search for a rare wheat penny. He loved working with his hands and was always eager to learn a new trade and was set on doing it himself…many YouTube videos later and he always seemed to get the problem solved! Tom’s personality lit up a room; his laughter was contagious and his quick wit and humor easily drew others to him. He was beloved by many and will be greatly missed. Tom is survived by his wife, Nichole Jones, Mason City; his children, Tucker Jones, Clear Lake; Xavier, Harlow, and Jaxtyn Jones, Mason City; his parents, Tom and Susan Jones, Mason City; siblings, Audra (Brian) Paulsen, Mason City, Mike (Nikki) Jones, Mason City, and Rob Jones, Mason City; Father and Mother in law, Mark and Deb Wiebrand; brothers and sister in law, Mike Wiebrand, Michelle Loney, Isaac Wiebrand, and Phillip Wiebrand; and nieces and nephews, Nick, Logan, Maverick, Abby, Cruz, Jay, Harper, Landry, Marcy, and Gabe; as well as his extended family members and many friends. He is preceded in death by his maternal grandparents, John and Hermalinda Gomez; paternal grandparents, Bob and Lorraine Jones; and uncles, Terry Jones, Dan Jones, Raymond Gomez, and Nicholas Gomez.

The family of Thomas Zachary Jones created this Life Tributes page to make it easy to share your memories.

Send flowers to the Jones family.