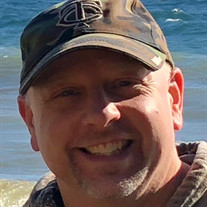 Terry Joseph Simon, 51, of Hastings, MN, died Thursday, November 18, 2021, at United Hospital in St. Paul, MN. Terry was born January 22, 1970, the son of Wilbur and Charlotta (Winkels) Simon in Osage, IA. A graduate of Osage High School, he attended Dakota County Technical College in Rosemount, MN where he earned his automotive technician degree. He spent most of his career working as a lead mechanic at Luther Hudson Chevrolet GMC in Hudson, WI. Terry was a member of St. Elizabeth Ann Seton Catholic Church in Hastings, where he was involved with many church groups and volunteer committees. He loved spending time outdoors fishing, hunting and camping and enjoying his favorite spots in northern Minnesota on the Gunflint Trail. Anyone who knew Terry knew what a selfless and giving person he was. Always willing to drop everything to help a friend, neighbor or family member in need, Terry put others first and cared deeply about those he was close to. On any given night or weekend, it was not unusual to find Terry at a friend or family members’ house, helping to fix a car, lending a hand with yardwork, or enjoying some of his latest smoked meat or cheese creations next to a fire. To him, time spent with those he cared about was everything. If you asked, Terry would be there, no matter what. That’s just who he was. He showed up when it mattered and never complained or expected anything in return. He did it simply because he wanted to, and because helping others brought him great joy. He was loyal to a fault and had one of the biggest hearts you’ll ever meet. He was one of those guys that you just loved to be around. While our hearts are broken, we take comfort in knowing that he is reunited with God and family in Heaven, and just like he was here on Earth, will be there for us always, from Above. Terry is survived by his mother, Charlotta Simon of St. Ansgar, IA; siblings, Audrey (Robert) Umstead of Orchard, IA, Ricky (Christal) Simon of St. Paul, MN, June (David) Retterath of McIntire, IA and Carol (Jason) Tesch of St. Ansgar, IA; nieces and nephews, Robbie Umstead, Hallie and Ashley Simon, and Beatrice and Dawson Retterath; his friend of 20 years, Brian Welke, his wife Breanna and their daughters Evelyn and Nora Welke; and many special neighbors and friends. He was preceded in death by his father, Wilbur; brother, Michael “Hoss” Simon and niece, Cecilia Michael Retterath. A Mass of Christian Burial will be held at 11:00 a.m. Monday, November 29, 2021, at Sacred Heart Oratory, 2695 480th St., Meyer, IA, with Rev. Raymond Burkle and Rev. Dave Hennen concelebrating. Inurnment will be at Visitation Catholic Cemetery in Stacyville at a later date. Visitation will be held from 1:00-3:00 p.m. Sunday, November 28, 2021, at Sacred Heart Oratory. Family suggests memorial contributions to St. Elizabeth Ann Seton Catholic Church in Hastings, MN.

The family of Terry Joseph Simon created this Life Tributes page to make it easy to share your memories.

Send flowers to the Simon family.