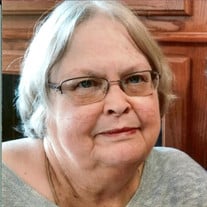 Tamara “Tammy” D. Arnoldussen, 69, of Mason City, passed away Tuesday, October 20, 2020 at Mercy One – Main Campus, Des Moines. A funeral will be held 11:00 a.m. Tuesday, October 27, 2020 at Hogan-Bremer-Moore Colonial Chapel, 126 3rd Street NE, Mason City, with Rev. Mark Doebel officiating. Burial will be held at Memorial Park Cemetery in Mason City. A visitation will be one hour prior to services at the funeral home. Memorial contributions may be directed to the family and a charity will be established at a later date. Tamara was born January 5, 1951 in Buffalo Center, daughter of William and Janice (Bonacker) Ward. Her father was in the Navy, the family was stationed in Turkey, Spain and Germany and she was able attend schools here. During her younger years in Spain, she and her sisters would ride bulls for fun. After her father’s honorable discharge the family moved back to the Charles City area and this is where attended and graduated from Charles City High School, class of 1969. She met the love of her life, Donald “Arnie” Arnoldussen, in Spain, as he served in the Navy as well. She was united in marriage to Arnie at the Little Brown Church in 1971 and to this union two boys were born. Tammy worked for the Heritage Care Center in Mason City as a Dietary Aide for several years. Tammy enjoyed raising her two boys and attending all of their school activities. She cherished the time she spent with her grandchildren and spoiling them. Tammy looked forward to baking her sugar cookies for Christmas every year and spending time with family and friends. During the summer months, Tammy would go over to the lake and take the dogs for a walk, watch the boats on the lake and listen to the bands that would play at the park in Clear Lake. Tammy is survived by her two sons, Chris Arnoldussen of Mason City and Brian (Courtney Billings) Arnoldussen of Mason City; two grandchildren, Chloe and Jax Arnoldussen; two sisters, Melanie Hargrave and Stephanie (Steven) Sinnwell; four legged best friend, Abby. Tammy is preceded in death by her parents, William and Janice Ward; husband, Don Arnoldussen.

The family of Tamara D Arnoldussen created this Life Tributes page to make it easy to share your memories.

Send flowers to the Arnoldussen family.