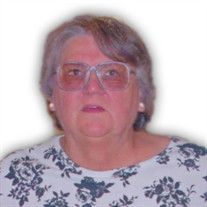 Susan L. Burns, 78, of Rockford, passed away Wednesday, March 2, 2022 at Mitchell County Regional Health Center in Osage. In keeping with Susan’s wishes, cremation has taken place and a private memorial service will be held at a future date. The daughter of Arthur and Inez (Millard) Roy, Susan was born on April 20, 1943 in Charles City. She grew up in Rudd, attending and graduating from Rudd-Rockford-Marble Rock High School in 1961. Following high school Susan was united in marriage to Larry Sigler in 1961. The couple lived in Rudd along with their two children, Tim and Tami. Susan and Larry later divorced in 1972. In 1975 Susan was united in marriage to Donald Burns and to this union their daughter, April was born. Together Susan and Donald were blessed with 45 years of marriage before Donald’s death on February 27, 2021. For many years Susan and family lived in Rudd before moving to an acreage near Osage. She loved spending time with the different farm animals on the acreage. She and Donald then moved to Rockford a few years ago. In her free time Susan loved reading and could often be found with a book in hand. She also enjoyed cooking and shopping and was known for keeping a fresh bouquet of daisies around the house. Family can first and foremost for Susan and she cherished the time spent alongside one another. She was the proud grandmother of eight grandchildren and ten great grandchildren, all of whom she loved dearly. Those grateful in sharing in her life are her children, Tim (Jeanne) Sigler, Rockford, Tami (Tod) Cleghorn, Rockford, and April (Herb) Eckard, Cresco; grandchildren, Marcus, Christian, Tori, Brad, Stephanie, Kristina, Zach, and Shawn; ten great grandchildren; and extended family members and friends. She is preceded in death by her parents, Arthur and Inez; her husband, Donald; and her siblings.

Susan L. Burns, 78, of Rockford, passed away Wednesday, March 2, 2022 at Mitchell County Regional Health Center in Osage. In keeping with Susan&#8217;s wishes, cremation has taken place and a private memorial service will be held at a future... View Obituary & Service Information

The family of Susan L. Burns created this Life Tributes page to make it easy to share your memories.

Send flowers to the Burns family.