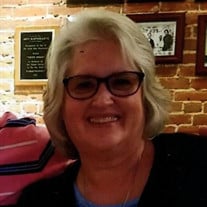 Clear Lake - Sue E. Lollar, 67, of Clear Lake, passed away Wednesday, December 30, 2020 at MercyOne North Iowa Medical Center. A celebration of life will be held at a later date in the summer of 2021. Memorial contributions may be directed to The American Heart Association. Condolences may be sent to Mike Lollar of 913 Main Ave, Clear Lake, 50428. Sue E. Bonnar was born February 26, 1953, daughter of Alex and Minnie (Helenga) Bonnar of Chicago, Illinois. She graduated from Plainfield, Illinois, class of 1971. After high school, she married the love of her life Mike Lollar on October 9, 1971 and to this union two children were born. After their marriage, they moved to Crest Hill, Illinois and bought their first home, in 1972. She worked as a telephone operator until her son, Michael, was born and then was able to stay at home and raise her sons. During the early 80’s, she re-entered the workforce at various customer service areas. In 1992, Mike and Sue moved to the Clear Lake area, and she worked briefly for Target in Mason City and Serta in Clear Lake. She spent many years and made many friendships while working at Clear Lake Bank and Trust in Clear Lake and later in Garner. In her retirement, she worked for Northside Automotive, and Stellar in Garner. In 2018, they moved to California and just recently moved back to Clear Lake in the fall of 2020, citing that they wanted to be close enough to make breakfast for their grandchildren. She enjoyed traveling by ground only to National Parks, family events, and functions. She liked hiking, going to all the new movies, and shopping. She loved reading, organizing family functions, making everyone play games and do puzzles. Sue loved spending time with her family, grandchildren and friends throughout the years. She was a collector of all things purple, elephants, and was an avid Chicago Bears fan. Sue will be remembered for her friendliness and being able to talk to anyone. Sue is survived by her husband, Mike Lollar of Clear Lake; two sons, Michael (Michelle) Lollar of Clear Lake and Matthew (Rhonda Massie) Lollar of Bloomington, Illinois; seven grandchildren, Jessica, Alexander, Nathan, Bridget, Charlotte, Graham, and Brian Lollar; two brothers, Jeffrey Bonnar of Villa Park, Illinois and Jon (Barbara) Bonnar of Calimesa, California; one sister, Barbara Schumann of Braidwood, Illinois, many nieces, nephews and extended family members. She is preceded in death by her parents, Alex and Minnie Bonnar; and a brother, James Bonnar.

Clear Lake - Sue E. Lollar, 67, of Clear Lake, passed away Wednesday, December 30, 2020 at MercyOne North Iowa Medical Center. A celebration of life will be held at a later date in the summer of 2021. Memorial contributions may be directed... View Obituary & Service Information

The family of Sue E. Lollar created this Life Tributes page to make it easy to share your memories.

Send flowers to the Lollar family.