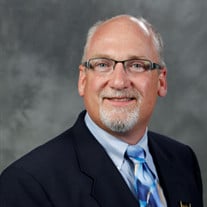 Dr. Steven Peter Goetz, 58 of Coralville, IA, formerly of Mason City, IA, passed away on Tuesday, February 16, 2021 after a valiant 23-month battle with an aggressive Bladder Cancer, never once wavering in his faith in our Lord Jesus Christ.... View Obituary & Service Information

The family of Dr. Steven Peter Goetz created this Life Tributes page to make it easy to share your memories.

Send flowers to the Goetz family.