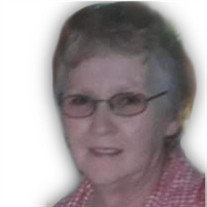 Stephanie Orozco, 72 of Mason City passed away Saturday, April 9, 2022 at MercyOne North Iowa Medical Center in Mason City. Stephanie Jimenez was born November 21, 1949 in Mason City, IA the daughter of Saragosa “Jim” Jimenez and Helen Godfrey. She grew up in town, graduating from Mason City High School in 1969. On November 4, 1967 she married Anthony Orozco and the couple had 3 children, Michael, Matthew, and William. The couple made their home in Mason City where she raised her children before beginning work as a Sales Associate at KGLO for numerous years. Stephanie enjoyed gardening, planting flowers, crocheting, baking, and spending time with family, especially her grandchildren, Nicole, Michael, Samantha, Amanda and Samuel Orozco and Jessica Paulson as well as her many great-great grandchildren. She was a rock for her huge family, fought many health issues and won. She will be deeply missed by many. She is survived by her husband of 54 years, Tony; her sons, Mike (Trish) Orozco and Bill (Harley) Orozco; siblings, Valorie (Bob) Rink, and the Rev. John William IV (Wanda) Jimenez; numerous aunts, uncles, cousins, nieces and nephews. She was preceded in death by a sister Elizabeth Mathews, brothers, Douglas (Corrie) Jimenez, David Brian Jimenez; a son, Matthew Orozco; nephew, John Eric Jimenez; and many extended family members. Per her wishes there will not be a service. Family will have a celebration of life at a later date.

The family of Stephanie Orozco created this Life Tributes page to make it easy to share your memories.

Send flowers to the Orozco family.