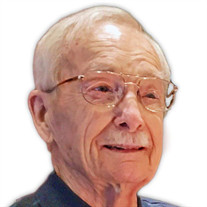 Sherwood Marsh, 92, of Eden Prairie, MN and formerly of Mason City, died Friday, March 12, 2021 at Prairie Bluff Senior Living in Eden Prairie. A Funeral Mass will be held at 10:30 am Wednesday, March 17, 2021 at Epiphany Parish – Holy Family Catholic Church, 722 N. Adams Ave., Mason City with the Rev. Neil Manternach, Celebrant. Inurnment will be held at a future date in Ft. Snelling National Cemetery, Minneapolis, MN. Sherwood’s Family will greet relatives and friends one hour prior to Mass at the church on Wednesday. The son of Wallace and Opal (McGregor) Marsh, Sherwood was born on December 1, 1928 in Duluth, Minnesota. He grew up alongside his brother, Douglas, at various locations in the Midwest. Following high school Sherwood enlisted in the United States Army, and served in World War II from 1946 until November of 1948 with most of his time served in occupied Japan. On June 23, 1951 he was united in marriage to Clare Mary Schafer at the Basilica of St. Mary in Minneapolis. Together they would be blessed with four children and 61 years of marriage before Clare’s passing in 2013. For many years Sherwood worked as an engineer for Seabee Corporation in Hampton. Those grateful in sharing in his life are his children, Brian Marsh, Brainerd, MN, Sheryl Marsh, New Hope, MN, David (Ann) Marsh, Chanhassen, MN, and Robert Marsh, Burnsville, MN; grandchildren, Daniel Marsh, Minneapolis, MN, and Laura (Nik) Badovinac, Raleigh, NC. Sherwood is preceded in death by parents, Wallace and Opal Marsh; his wife, Clare Marsh; grandson, Jeffrey Marsh; and Brother, Douglas Marsh.

The family of Sherwood L. Marsh created this Life Tributes page to make it easy to share your memories.

Sherwood Marsh, 92, of Eden Prairie, MN and formerly of Mason...

Send flowers to the Marsh family.