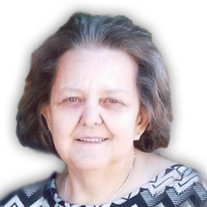 Sherry J. Frank-Nock, 73, of Mason City passed away Wednesday, March 30, 2022 at the Manly Specialty Care Center. A Celebration of her Life will be held 6:00 p.m. Monday, April 4, 2022 at Hogan-Bremer-Moore Colonial Chapel, 126 3rd St. NE, Mason City, IA 50401 with Deacon Regan Banks officiating. Visitation will be from 4:00 p.m. to 6:00 p.m. prior to the service on Monday. Memorials may be directed in care of her family. Sherry Jean Beaver was born March 24, 1949 in Mason City, the fourth child of Merle and Fern (Priem) Beaver. She grew up in Mason City, graduating from high school in 1967. Sherry found fulfillment caring for others. She assisted in running a funeral home in Illinois and served as a houseparent to children living in Mooseheart, IL. Sherry was a dedicated, successful CNA for over 40 years. She served at Good Shepherd in Mason City and Good Samaritan in Algona, where she received numerous awards including CNA of the Year. Sherry married Donald Frank, and to this union, in 1978, her only son was born, Steve Frank. Sherry was an avid Iowa Hawkeye fan, and would often call family to share a “Go Hawks” before the game. She adored being a grandma to Ian and Kennedi and cherished time with family. Those surviving are her son, Steve Frank of Mason City; grandchildren, Ian and Kennedi Frank; step-children, Nathan, Nichole and Jason Nock and their families; siblings, Jerry (Bev) Beaver, Randy (Lana) Beaver and Shelly (Marty) Allen; sisters-in-law, Pat Beaver and Ida Beaver; as well as numerous nieces, nephews, and extended family. Preceding her in death are her parents, Merle and Fern, brothers, Larry and Gary Beaver and husbands, Donald Frank and Robert Nock. Hogan-Bremer-Moore Colonial Chapel, 641-423-2372. ColonialChapels.com

The family of Sherry J. Frank-Nock created this Life Tributes page to make it easy to share your memories.

Send flowers to the Frank-Nock family.