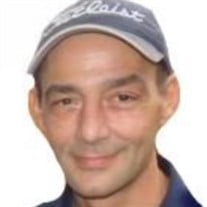 Scott Barragy, 51, of Mason City, passed away Saturday, February 13, 2021, at MercyOne North Iowa Medical Center. Mass of Christian Burial will be held at 10:30 a.m. on Friday, February 19, 2021 at Epiphany Parish-St. Joseph Catholic Church, 302 5th Street S.E., Mason City. Following the Mass, cremation rites will be accorded and inurnment will be held at a future date in Memorial Park Cemetery, Mason City. Visitation will be held 4:30 p.m. to 7:00 p.m. Thursday, February 18, 2021 at Hogan Bremer Moore Colonial Chapel, 126 3rd Street N.E., Mason City where a Scriptural Wake service will begin at 7:00 p.m. Scott was born on October 6, 1969 in Mason City, Iowa. The son of Joe and Mary Barragy. He grew up in Clear Lake and was a 1988 graduate of Clear Lake High School. He participated in cross country and wrestling while in school. After graduation he attended NIACC. Scott worked in many restaurants and bars in the North Iowa area including the The Ritz, Rookies, VFW and his last place of work DiamondJo Casino. Scott also worked for the family business for a number of years, O’Brien Moving & Storage. Scott enjoyed life and his many friends. He loved to hunt in his younger years. Golfing on Mondays with the retired crew and fishing later on in his life became his hobbies. Scott was married to Ann Rouse in 2002 to which his daughter Ella was born. Scott enjoyed cheering on the Hawkeyes and the Dallas Cowboys. Scott will be remembered for his kind heart and infectious smile. Scott is survived by his daughter Ella, his father Joe, brothers, Mick(Leeann), Tom(Carole), Dan(Dawn), Jay(Nicki) and nieces and nephews (Chris, Taylor, Niko, Matt, Jordyn, Rissa, Jack and Grace) many cousins and aunts and uncles and his dog Cocoa. He is preceded in death by his mother Mary and his grandparents

The family of Scott Barragy created this Life Tributes page to make it easy to share your memories.

Send flowers to the Barragy family.