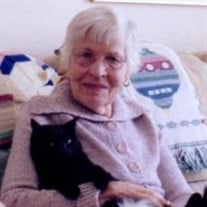 Ruth “Arlene” Foutch, 96, of Mason City, died on a beautiful Fall day Tuesday, October 26, 2021, at Heritage Care Center in Mason City. Per Arlene's wishes, her body has been cremated and no services are scheduled at this time. Inurnment will be held at Memorial Park Cemetery in Mason City at a later date. Arlene was born February 24, 1925, the only child of James and Emma Delia (Applebee) Mumford of Russell, Iowa. Unusual for the time, both of her parents were in their 40's when she was born. Her family also included five older half brothers and sisters. She grew up near Russell on a farm and graduated from Russell High School. After high school she then trained at the Government Teletype School in Omaha, Nebraska. Following her training she went to work at the Air Service Command Headquarters, Teletype Division, in Dayton, Ohio. Later moving to Charles City to work at Dr. Salsbury's Laboratories. Her future husband Gerald Foutch, also of Russell, Iowa, followed her moving to Charles City to work and live with her brother Albert. She married Gerald Foutch on Easter Sunday, April 6,1947 at the little Brown Church in Nashua, Iowa. In 1961 she and Gerald and their three children moved to Mason City and the family became members of the First Methodist Church. Here she was a homemaker raising her children and then worked in retail at Younkers for several years before retiring. She loved traveling with Gerald and her family, whether it was going abroad to Germany, spending winters in Arizona or camping at Camp at the Woods or Clear Lake State Park. Playing cards was always a passion with different Bridge Clubs for decades. Coffee with neighbors, friends and her co-workers from Younkers was something she always looked forward to. An excellent seamstress, sewing was something she enjoyed and always had a flair for style. She made delicious cookies for her family, friends and neighbors. Her family looked forward to her homemade noodles at holiday dinners. Family history, heritage and stories were always dear to her and readily shared at family gatherings; including tales of taking Tony the pony to school from the farm until they were they hit by a car and the poor pony was never quite the same. She relished spending time with family, grandchildren, and great-granddaughters and lavished in the attention. A lifelong love of animals made for many pets throughout the years. Arlene is survived by her children, Craig (Kathy Novak) Foutch of Mason City, Dee (Russ Erickson) Foutch of Woodbury, Minnesota and Gary Foutch of Mason City; grandchildren, Tyler (Kris), Jessica and Kara (Tavis); great-granddaughters, Sophia and Lydia; nieces, Janice Twinam and Jayane Hardie; and her much loved cat, Mindy. She was preceded in death by her parents, husband(on December 12, 2016), and siblings. In her memory share a cup of coffee with a friend, make some cookies, adopt a pet or donate to the Humane Society of North Iowa.

Ruth &#8220;Arlene&#8221; Foutch, 96, of Mason City, died on a beautiful Fall day Tuesday, October 26, 2021, at Heritage Care Center in Mason City. Per Arlene's wishes, her body has been cremated and no services are scheduled at this time. Inurnment... View Obituary & Service Information

The family of Ruth "Arlene" Foutch created this Life Tributes page to make it easy to share your memories.

Send flowers to the Foutch family.