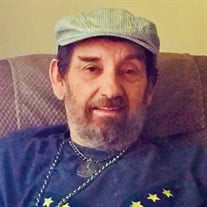 Ronald (Ron) Huntley, 83, of Clear Lake, passed away on Saturday October 23, 2021, at the MercyOne North Iowa Hospice in Mason City, after a lengthy illness. Visitation will be held from 2:00 to 4:00 p.m. on Friday November 5, 2021, at the Ward-Van Slyke Colonial Chapel, 310 1st Ave. N., Clear Lake. Private inurnment services will be at the Clear Lake Cemetery with military honors provided by the Clear Lake VFW Post 4868 Honor Guard. Ron was born on December 25, 1937, to Laurice and Fayne (Patton) Huntley, in Mason City, Iowa. His mother liked to say that he was the best Christmas present she ever received. Ron graduated from Clear Lake High School in 1956. He then served for two years in the US Army, stationed in Kaiserslautern, Germany, and while there, got to travel to several European countries. He worked for H & H Distributing, and then for the City of Clear Lake as a Water Treatment Plant Operator for twenty four years, retiring in 1999. In 1964, Ron married Michele Quibel in Clear Lake, and together they raised their three children, Caroline, Tom, and Mike. The couple later divorced, but remained lifelong friends. Ron liked to bowl, and belonged to a league in his younger years. Later, he liked to travel to many US National Parks, and work on numerous decorating and landscaping projects. A lifelong resident of Clear Lake, he loved his hometown, and knew many of its residents. He enjoyed photography, taking many pictures of his family, especially his grandchildren and great-grandchildren, and of the lake, and places where he traveled. Ron is survived by his children, Caroline (John) McManigal of Mason City, Thomas Huntley of Rochester MN, Michael Huntley of Andover MN, four grandchildren, one step grandchild, three great-grandchildren and one step great-grandchild, brothers Kenneth (Bettie) Huntley and Wayne (Marge) Huntley, sister-in-law Gloria Huntley, and several nieces and nephews. Ron was preceded in death by his parents, his brother Keith, his nephew Scott Huntley, and his beloved little dog Reggie. Memorials may be directed to MercyOne Hospice, Mason City, or the Hawkeye Harvest Food Bank. The family would like to express their gratitude to Ron’s caregivers of the past three years at Country Meadows, Apple Valley, St Mary’s Hospital in Rochester, and MercyOne and Hospice of Mason City.

The family of Ronald Dean Huntley created this Life Tributes page to make it easy to share your memories.

Ronald (Ron) Huntley, 83, of Clear Lake, passed away on Saturday...

Send flowers to the Huntley family.