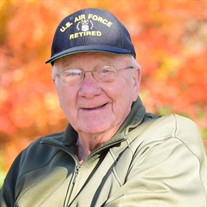 Ronald Henry Flatness, 89, passed away on Monday, January 10, 2022, in Des Moines, Iowa at MercyOne Medical Center. A Memorial Service will be held at 11:30am, Friday, January 14, 2022, at Trinity Lutheran Church, 213 N Pennsylvania Ave, Mason City, IA, with Pastor Dan Gerrietts officiating. Inurnment will be held at a later date. Visitation will be held from 10:30am to 11:30am on Friday, prior to the service at Trinity Lutheran Church. Face masks are required to be worn within the church. Ron was born on October 3, 1932 to Henry and Alpha (Aamodt) Flatness and grew up in Mason City, IA. He graduated from Mason City High School in 1950. After graduation, Ron enlisted in the United States Air Force and deployed to Japan and Korea during the Korean War. During his time in Japan, he was named Airman of the Month. He continued to serve his country in the Air Force Reserves for 17 years, and was employed as a steam fitter at Armour Packing Plant for 32 years. After retiring, he worked for the Mason City School system and the NIACC Building Trades Program, where the instructor told him, “You know more than I do!” On June 3, 1956, Ron married Ragna Annette Mentink at Trinity Lutheran Church. They lived in Mason City and raised their three boys, Mark, Bruce, and Charlie. He was known for his whistling abilities, and could summon the boys for dinner from East Park. Ron was a handyman; he loved woodworking and built furniture out of his walnut trees. Together, Ron and Ragna crafted a variety of handmade pieces that the family cherishes today. Ron was a loyal fan of the Iowa Hawkeyes and Minnesota Vikings; he watched every game from his rocker recliner. He loved playing cards and overbid his hand often just to mess with his opponents. He was lovingly nicknamed Mr. Miss-Deal when playing Up and Down the River. Those left to cherish memories of Ron are his wife of 65 years, Ragna of Ankeny, IA; his children Mark (Josie) of Ankeny, IA, Bruce (Lori) of Scottsdale, AZ, Charlie (Ann) of Ankeny, IA; his grandchildren Derek Flatness of Des Moines, IA, Jamie Flatness of Des Moines, IA, Vanessa (David) Boone of Phoenix, AZ, Ashley (Casey) Pothour of Mesa, AZ, Leah (Nick) Davis of Phoenix, AZ, Tanner Flatness of Snomass, CO, Jacob (Chandler Carey) of Ankeny, IA, Alexandra (Shane) Connelly of Bloomington, MN, Sydney Flatness of Ankeny, IA, and two great grandchildren, Ainsley and Daniel. Ron is preceded in death by his parents, Henry and Alpha and parents-in-law Louis and Jenny Mentink; and his sister, DeLoris (Allen) Low; as well as numerous other relatives. For those unable to attend the service in person a livestream will be available at the time of the service on the Hogan-Bremer-Moore Colonial Chapel Facebook page, https://www.facebook.com/HoganBremerMooreColonialChapel

The family of Ronald Henry Flatness created this Life Tributes page to make it easy to share your memories.

Send flowers to the Flatness family.