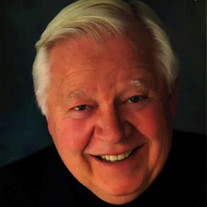 Ronald Dean Crane, known to many as “RD”, 83, of Iowa City and formerly of Mason City, died December 31, 2020 in his home in Iowa City. Ron passed peacefully surrounded by his family. Visitation will be held Friday evening, January 8, 2021 from 4 p.m. until 6 p.m. at Hogan Bremer Moore Colonial Chapel, 126 3rd St. NE, Mason City. Ron’s family will hold a private funeral service on Saturday, January 9, 2020. Friends are invited to view the service via live stream on Hogan Bremer Moore Colonial Chapel’s Facebook page at 1:00 pm, Saturday, January 9, 2020. In lieu of flowers and customary remembrances, memorials may be left to Ron’s family to be used towards a future memorial. The son of Howard and Lottie (Lee) Crane, Ron was born on August 15, 1937 in Hampton, Iowa. He attended Mason City High School, graduating among the class of 1955. On April 5, 1957 Ron was united in marriage to Nancy Schurtz and together they would be blessed with three sons, Jeff, Rus, and Steve. He worked for the Des Moines Register and Tribune in circulation for 50 years prior to his retirement. He was a lifelong and active member of Wesley United Methodist Church in Mason City. Ron was one of the “good guys”, he always had a story to tell and a project to start. He was truly a self-made man and was fearless when it came to building, designing, and renovating anything. Throughout the years he enjoyed helping his sons with projects and took pride in everything he did. He led his life with true positivity and was a mentor to so many. He loved his family fiercely and was proud of all their accomplishments. He enjoyed having everyone to the lake home in Clear Lake that he designed and built to enjoy all the amenities. You would often find him reading to the grandchildren on a lazy day in effort to get them to nap with him, or on the dock assisting them while fishing. Over the years, Ron, took his sons and grandsons on numerous fishing trips to Canada. Later, following retirement from the Des Moines Register, Ron and Nancy, moved to Iowa City to be closer to the youngest grandchildren. He was always working in the yard and passed a lot of time attending activities, assembling puzzles, watching western movies, reading, and supporting the Iowa Hawkeyes. Those grateful in sharing in Ron’s life are his wife, Nancy; sons, Jeff (Jan) Crane and their son, Charlie (Heidi) all of Webster City; Rus Crane of Iowa City and his children, Sam (Tessa) Minneapolis, Alec (Caitlyn) Mason City, and Chase (Curtis)Newburgh, NY; and Steve (Jill) Crane and his children, Abbi and Tate all of Iowa City; three great granddaughters, Hayden, Rowan, and Haisley; brother, Roger (Darlene) Crane; brother in law, Dr. Steve (Cheryl) Schurtz; sister in law, Ann Schurtz; and several nieces and nephews as well as extended relatives and many friends. Ron is preceded in death by his parents; brother, Howard Crane; brother in infancy, Robert Crane; and brother in law, Dr. Russell Schurtz.

Ronald Dean Crane, known to many as &#8220;RD&#8221;, 83, of Iowa City and formerly of Mason City, died December 31, 2020 in his home in Iowa City. Ron passed peacefully surrounded by his family. Visitation will be held Friday evening, January... View Obituary & Service Information

The family of Ron “RD” Crane created this Life Tributes page to make it easy to share your memories.

Send flowers to the Crane family.