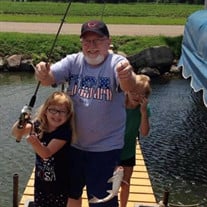 Roger A. “Tweety” Dannen, 71 of Clear Lake passed away Friday, March 4, 2022 at MercyOne North Iowa Medical Center in Mason City. A memorial service will be held 10:30 a.m. Saturday, March 12, 2022 at Ward-Van Slyke Colonial Chapel, 310 1st Ave N, Clear Lake, IA. Visitation will be held one hour prior to the service. Roger Allen Dannen was born July 21, 1950 in Mason City, the son of Engle and Gladys (Bonner) Dannen. He grew up in the North Iowa area, attending Swaledale, Clear Lake, Swea City Schools and graduated from Meservey-Thornton in 1967. He entered into the United States Army, where he served in Vietnam from January 1970 until his honorable discharge in October 1971. Roger received a purple heart and returned home to Iowa where he was married and started a family. He was blessed with two daughters, Jenn and Trisha. Roger loved the open road and enjoyed driving truck. He drove truck for the Co-op and owned his own trucking business, eventually working at TMC in the specialized division for 27 years until his retirement. For many years in retirement Roger drove for Pritchard Chevrolet and hauled grain for the Thornton Co-op. Roger served on the Thornton volunteer fire department for over 15 years and was a longtime member of the Vietnam Veterans of America. He enjoyed time spent fishing and trips to Canada with friends over the years. He looked forward to NASCAR races, baseball games and Chiefs’ games with family and friends. On June 25, 2000 he married Deloris Ann Ochoki and two families became one. Most of all, Roger loved his family. Time spent with his daughters and their growing families brought him unparalleled joy. His greatest love was becoming a grandpa and great-grandpa. Those left to cherish his memory are his wife, Deloris Dannen; daughters, Jenn (Tom Frederick) Dannen of Omaha, NE and Trisha (Nick) Casey of Lee Summit, MO; beloved grandchildren, Alexa (Alex) Thielen, Madison and Saige Marshall, Harper and Isaac Kirby, Ella, Rylee and Korbin Casey; Deloris’ children Kevin and Gale Lacek of Canby MN, Keith and Jennette Lacek of Wilmar MN, Todd and Sarah of Lake Cochrane SD, Lori (Lacek) and Rex Van Dyke of Brandt SD, Floyd and Caroline Lacek of Watertown SD; many grandchildren and great-grandchildren; as well as numerous extended family members and many cherished friends. Preceding him in death are his parents; a brother, John Dannen; and an infant son, Jeffrey. Ward-Van Slyke Colonial Chapel, 310 1st Avenue North, Clear Lake, IA 50428. (641) 357-2193. ColonialChapels.com

The family of Roger A. Dannen created this Life Tributes page to make it easy to share your memories.

Send flowers to the Dannen family.