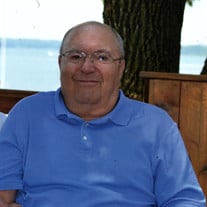 Dr. Robert P. “Doc” Terry, 82, of Clear Lake, passed away Monday, November 30, 2020, at Oakwood Care Center in Clear Lake, after a series of health issues. Per Doc’s wishes, his body has been donated to the University of Iowa Deeded Body Program for medical research. A Celebration of Life will be held at a later date. Doc was born February 2, 1938, the son of Dr. Herbert H. and Eleanor (Rethwisch) Terry in Spillville, IA. Doc was a 1955 graduate of Calmar High School in Calmar, IA. He and Dora Lee were married on Sept.3, 1958 in St. Lucas, Iowa. After receiving his Doctor of Veterinary Medicine degree from Iowa State University in 1966, Doc practiced veterinary medicine in Thornton, IA for50 years. Doc was very active in his career and his community as a member of St .Patrick’s Catholic Church, life member of the Iowa Veterinary Medical Assn. where he served on their board, Pleasant Valley golf course board member, Thornton City council member and Lion’s Club. Doc was an avid Iowa State Cyclone fan, enjoyed fast pitch softball and golf. His family was his priority. He enjoyed attending all of his children’s and grandchildren’s events and supporting their activities. Doc was always good for a story and if he didn’t have one he would make one up. Living in Thornton and through his practice, he and Dora Lee developed lifelong friendships. Doc is survived by his wife Dora Lee of 62 years; daughter Gerilynn (Hal) Berding of Clear Lake, IA, Lise (Steve) Gulick of Mt. Pleasant, SC, Chris (Stacey) Terry of Mantorville, MN and Troy (Maureen) Terry of South Bend, IN. Grandchildren Jennifer (Tyler) Halfpop, Matthew (Breanna) Berding, Elizabeth (Casey) Henderson, Anna Gulick, Jayson Gulick, Nicholas Terry, Emilee Terry, Isaac Terry, Benjamin Terry, William Terry; Great grandchildren Shepherd Halfpop, Iris Halfpop, Royce Henderson, Calum Henderson and many nieces and nephews. He was preceded in death by his parents, his sister, Leta Erickson and other close relatives. Due to Covid 19 conditions, services will be held at a later date. In lieu of flowers, memorials will be distributed to organizations that impacted Doc's life.

The family of Dr. Robert Peter Terry created this Life Tributes page to make it easy to share your memories.

Send flowers to the Terry family.