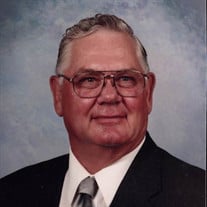 Robert G. “Bob” Scheppler, 88, of Rockford passed away peacefully at MercyOne North Iowa – Hospice in Mason City. A memorial service will be held 12:30pm Sunday, March 13, 2022 at Zion Lutheran Church, 805 E. Main St., Rockford, with Pastor Bob Scheurer officiating. Lunch will immediately follow the service at Zion and inurnment will then be held in Riverside Cemetery, Rockford. Visitation will be held Saturday evening, March 12, from 5:00pm until 7:00pm at Hogan Bremer Moore Colonial Chapel, 126 3rd St. NE, Mason City. Bob was born October 14, 1933 in Kamrar, Iowa. His family moved to the area in 1941 where they farmed for the majority of his life. In addition, Bob worked part time at KMART . He married Carolyn (Salsbury) Scheppler in 1963 and raised four children, Andrew (wife, Kimberly, and children, Tori and Doug), Robin (children, JR, Korissa, Kayleigh, and Elias), Khris (Wife, Amy, and children, Chase and Evan), and John (Girlfriend, Staci, and children, Ava and Ali). Bob had many skills, including construction, woodworking, and mechanical. He could build and fix anything. He took great pleasure in making woodworking projects for his family, and the rocking horses he made for his grandkids were among his proudest. He also took great pleasure in helping friends and family, and was always only a phone call away. He loved the farm life and lived his life in service to the family, land, and livestock. He worked closely with neighbors, sharing labor and equipment between the farms. Even in his later years he could still regale you with stories about growing up farming and the people he knew along the way. He was active with the local Co-Ops and Farm Bureau, serving as president and on the board. He was a great equestrian and we think his only regret in life was that he wasn’t a cowboy driving cattle and saving the damsel in distress. He did live this life through his love of westerns from his childhood through his final days. Those left to cherish his memory are his wife of 58 years, Carolyn; his sister, Coleen Whipple; three sons; ten grandchildren; five great grandchildren; and many extended family members. Bob is preceded in death by his parents, George and Caroline; brother, Willard; sister, Katie; and daughter, Robin.

The family of Robert G. "Bob" Scheppler created this Life Tributes page to make it easy to share your memories.

Send flowers to the Scheppler family.