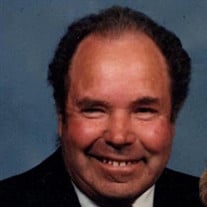 Robert Leonard Kimball, 96, of Ventura, died Friday, October 23, 2020, at MercyOne North Iowa Hospice in Mason City. A funeral service will be held at 11:00 a.m. Friday, October 30, 2020, at Ward-Van Slyke Colonial Chapel, 310 1st Ave. N., Clear Lake. Inurnment will be at Memorial Park at a later date. Visitation will be held one hour prior to the service at the funeral home where masks will be required. Robert was born October 10, 1924, the son of Walter and Ruth Alice (Whetsler) Kimball in Corwith, IA. He married Nettie Mehus on March 5, 1948, in Belmond. Robert grew up in Corwith and Klemme, attending school in Klemme. At the age of 17 he enlisted in the United States Navy and served three years during World War II as a machinist mate. After serving his country, Robert returned home and worked at Elm Bend Fishing Resort in Ventura. He later began his own television/radio repair business while also painting buildings. In the 1960’s, he began working for the Ventura School district as a bus driver and custodian until he retired. Robert was a member of the Ventura Methodist Church until it closed. He loved to camp, fish and travel with his family. During retirement, Robert and Nettie spent winters in California and Arizona. Robert is survived by his wife of 72 years, Nettie Kimball of Clear Lake; three daughters, Beverly (Wayne) Kozisek of Clear Lake, twin sister, Bonnie (Darrell) Bullington of Ramsey, MN and Nancy Glidden of Ventura; six grandchildren, Jenny (Tory) Reimann, Jason (Tina) Kozisek, Michelle (Oliver) Ricaille, Tammy (Chuck) Plaxico, Nathan Glidden of Ventura and Justin Glidden of Ventura; ten great-grandchildren, Tanner and Mikayla Reimann, Anastazia and August Kozisek, Mason, Max, Miya and Ashlee Plaxico, and Theo and Adrian Ricaille; and a sister, Ruth Floyd of Pacolo, OK. He was preceded in death by his parents; brother, Don Kimball; sister, Nadine Blank; and son-in-law, Charles Glidden.

The family of Robert Leonard Kimball created this Life Tributes page to make it easy to share your memories.

Send flowers to the Kimball family.