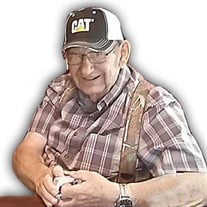 Robert Dale Inman, 84, of Mason City, went to join his Lord on Wednesday, October 14, 2020, surrounded by family A visitation with public viewing will be held Saturday, October 17, 2020, from 9:00am until 11:00am at Hogan Bremer Moore Colonial Chapel, 126 3rd St NE, Mason City. Robert Dale Inman was born June 22, 1936 in Mason City, IA. He had a twin brother named Richard. Robert and Richard were adopted by Robert and Laura Inman at birth. Robert attended Mason City High School and Mason City Junior College, excelling in football. He entered the United States Marine Corps upon graduation and was honorably discharged after serving his country. He met Darlene Fisher at a barn dance in 1962. They later married on May 26, 1962, to this union they would add a son, Steven Inman. Robert worked his early years driving truck for Mitchell Transport. He later retired from the United States Postal Service in 1999. After retirement he and Darlene enjoyed winters in Arizona. They also traveled to Oklahoma to visit Sheryl, Dan, grandkids and great grandkids. Robert enjoyed being in the shop helping prep the race cars for the weekend. He enjoyed his grandkids, playing cribbage, golf, bowling, going to races, having a nice yard, and Sunday dinner at Linda and Steve’s house with the grandkids. Robert had a strong faith and attended church regularly. He was so proud of all his family including his extended church family. Robert was a kind man and helped his friends and neighbors any chance he could. He will be missed by all! Robert is survived by his beloved son, Steven (Linda) Inman; step daughter, Sheryl Hammond Kaler (Dan); and grandchildren, David (Monica) Kaler, Andrew Inman, Gabriel (Meeghan) Kaler, and Mitchell Inman; great grandchildren, Mekhi and Azlin Kaler. Robert was preceded in death by his parents; twin brother, Richard; and wife, Darlene.

Robert Dale Inman, 84, of Mason City, went to join his Lord on Wednesday, October 14, 2020, surrounded by family A visitation with public viewing will be held Saturday, October 17, 2020, from 9:00am until 11:00am at Hogan Bremer Moore Colonial... View Obituary & Service Information

The family of Robert D. Inman created this Life Tributes page to make it easy to share your memories.

Send flowers to the Inman family.