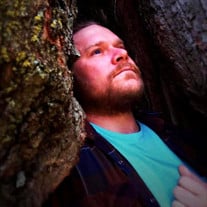 Robert “Bob” Michael McFarland (Dello), 42, went home to the Garden on April 4, 2021. A Celebration of Life and Love will be held from 2:00pm to 7:00pm on Monday, April 12, 2021 at the Hogan-Bremer-Moore Funeral Colonial Chapel, 126 3rd St NE, Mason City, IA. Family requests that attendants wear a tie-dye shirt and or your favorite band t-shirt for Bob along with a mask. Bob was born to Angie VanEvery-Vanderhoff and Carlin “Mac” McFarland on January 31, 1979 in Mason City, Iowa. He was a graduate of Mason City High School and worked many jobs spreading his joy to all who were blessed to meet him. When Bob loved, he loved with his full heart. The greatest loves of his life were his son Colby Robert McFarland and Music. Bob was the definition of the "life-of-the-party”, his impact on those he met will never be forgotten. He had a sense of humor out of this world and he made everyone smile ear to ear with joy and laughter. His bright light will shine on in the stars but the world is dimmer without his free spirit. Bob enjoyed attending music festivals, jamming on his bass guitar or any other instrument he could get his hands on, dancing until his feet couldn’t carry him, spending time with his family and friends and taking in the beauty of nature around him. He was a hippie soul; he was stardust and he was golden. From Iowa to California and back again, Bob touched the lives of many, he taught people to lighten up, never judge someone or a situation, to see the beauty in the world and to “smile, smile, smile”. One thing is certain, if Bob could have chosen any last words, he would have repeated the words of the Grateful Dead’s “What a Long, Strange Trip It’s Been”. Those left to cherish memories of Bob are his son, Colby McFarland; parents, Angie (Don) Vanderhoff and Carlin “Mac” (Wendy) McFarland; grandfather, Robert McFarland; siblings, Julie and Shawn Rockwell, Jack Seals (Misty), Sarah McFarland (Tanner), Jamie McFarland, Kimberly (Dustin) Drees, and Nicholas Vanderhoff; as well as many aunts, uncles, cousins, nieces and nephews. Bob was a friend to all. Bob is preceded in death by his maternal grandparents, Marvin and Dorothy VanEvery; paternal grandmother, Sedonna McFarland; aunt, Debra Grouette; uncle, Mickey VanEvery and soulmate Sarah Bohl. Bob would have given the shirt off of his back for anyone in need of help. In Bob’s honor we want to bring awareness to suicide in hopes that he may save someone’s life. If you are in need of help please call the National Suicide Prevention Lifeline at 800-273-8255 and remember, one thing is promised, the world is better with you in it and those who love you the most need you here.

The family of Robert Michael "Bob" McFarland (Dello) created this Life Tributes page to make it easy to share your memories.