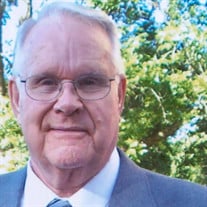 Robert Howard Arndt, 88, passed away on June 20, 2022, at Good Shepherd Healthcare Center. Robert was born on October 7, 1933, the son of Howard and Helen (Stoltenberg) Arndt.  He was born and raised in Mason City and graduated from Mason City High School. After high school, Robert joined the Navy during the Korean War.  He completed his training in Hutchinson, Kansas, and then went to Japan, and then finally to Alameda, California.  He met and married Marguerite (Siegrist) and two daughters, Pam and Sandi, were born to this union.  They divorced in 1978. After his service, Robert worked at State Brand Creamery before joining the Mason City Fire Department.  He studied and rose through the ranks to lieutenant and finally Fire Inspector/Arson Investigator in his 28 years with the department.  While at the fire department he helped start the rescue unit, he was the co-chair of the fire department’s annual Jerry Lewis Telethon fundraiser every Labor Day, and he was part of the Fire Department’s collective bargaining unit.   In 1979 he married Darlene (Shepherd), the love of his life.  When he retired from the Fire Department, he drove a school bus for the Mason City school district.  With a smile on his face and a soft spot in his heart, he became a beloved driver of “his kids.” Robert loved carpentry and woodwork and his family has been gifted with many beautiful pieces of his artwork through the years.  Robert loved animals and adopted a stray cocker spaniel, Blackie, for his daughters when they were young.  In his later years he loved spending time with his niece’s dogs, Bella and Molly.   Robert had a kind heart and a zest for life.  His basement bar parties for his fellow firemen were legendary.  And he loved to travel – first with his children to Canada, New York, Pennsylvania, Kansas, Wisconsin, Michigan, the East Coast and numerous Minnesota fishing trips, and later with Darlene as they traveled to 49 states in the continental U.S. Left to cherish his memory are his daughters, Pam (Richard) Olson, Kensett, Iowa, and Sandi (Chris) Arndt-Kohlway, Mount Airy, Maryland, his grandsons, Nathan and Brett Olson, and Nicholas Arndt-Kohlway.  He is survived by his sisters-in-law Charlene Francis and Gail (Jim) Schroeder and his special niece, Connie Pederson, who was a loving companion and caretaker during Robert’s Alzheimer’s journey. He is also survived by numerous nieces and nephews. Robert was predeceased by his wife Darlene, his parents, his grandson Alexander Arndt-Kohlway, his brothers, Donald and Charles Arndt, his first wife Marguerite,  his sisters-in-law, Lois Arndt, Kay Arndt, and his in-laws: Wes & Sharlene Beenken, Violet & Buford Christensen, Foster “Bing” Myers, Kenneth Shepherd, Dalton Francis, and his nephew, Donald Arndt, Jr. Robert was raised in the Lutheran faith and joined Faith Baptist Church in 2003. A Visitation and a Memorial Service will be held at a later date. In lieu of flowers and customary remembrances, memorials may be left in Robert’s honor to IAFF Local 41, 350 5th St SW, Mason City, IA 50401, or Humane Society of North Iowa.

Robert Howard Arndt, 88, passed away on June 20, 2022, at Good Shepherd Healthcare Center. Robert was born on October 7, 1933, the son of Howard and Helen (Stoltenberg) Arndt.  He was born and raised in Mason City and graduated from Mason City... View Obituary & Service Information

The family of Robert Howard Arndt created this Life Tributes page to make it easy to share your memories.

Send flowers to the Arndt family.