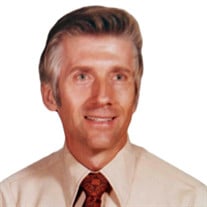 Richard “PeeWee” Wenger, 91, of Manly, passed away Tuesday, January 11, 2022, at Manly Specialty Care in Manly. A Memorial Service will be held 11:00 am Monday, January 17, 2022 at Bethlehem Lutheran Church, 428 W. Walnut Street, Manly, with Pastor Linda Johnson Prestholt officiating. Inurnment will be held at a future date in St. John’s Lutheran Cemetery, Albert City, IA. A Livestream of PeeWee’s service will be available on the Hogan Bremer Moore Colonial Chapel Facebook page. Richard was born on August 3, 1930 in Fort Dodge, the son of Rev. Carl and Signy (Halvorson) Wenger. He grew up in Albert City alongside siblings, Victor, Ruth, Paul, and John. From a young age PeeWee developed a love of all sports, but especially baseball. Following high school Richard attended Buena Vista College in Storm Lake where he pitched for two years on the college team. While attending Buena Vista he met the love of his life, Lois Rockwell, while she was working as a secretary for Chas G. Walters Manufacturing Company. They were united in marriage on October 5, 1952 in Albert City. Together they would be blessed with three children, Tim, Rhonda, and Terry. While working on his degree in education at Buena Vista, PeeWee signed with the Cleveland Indians where he pitched in their farm leagues for three years during the spring and summer while working towards his college degree in the fall and winter. In 1955 the family moved to Manly where PeeWee began his teaching career in Social Studies. He taught 7th, 8, and 9th grade for 37 years before retiring in 1992. PeeWee always enjoyed living an active and healthy lifestyle and many will remember seeing him jogging and in later years walking along his route across Manly. He enjoyed watching sports, especially baseball, and cheering for the Iowa Hawkeyes. Those grateful in sharing in his life are his children, Tim Wenger, Pueblo, CO, Rhonda Hermsen, Boulder, CO, and Terry Wenger, The Villages, Florida; grandsons, Austin Hermson (Elena Peraldi), Benjamin Hermsen (Jacqui Martina), Dane (Meghan) Hermsen, and Adam Hermsen; great grandchildren Hadley Hermsen and Alexander Hermsen; brothers, Paul Wenger and John Wenger; as well as many nieces, nephews, extended relatives and friends. He is preceded in death by his parents, Rev. Carl and Signy Wenger; his beloved wife, Lois; son in law, Fred Hermsen; and siblings, Victor Wenger and Ruth Rubhuhn.

The family of Richard "PeeWee" Wenger created this Life Tributes page to make it easy to share your memories.

Send flowers to the Wenger family.