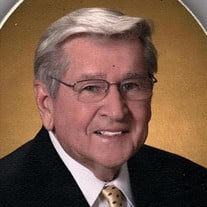 Raymond “Andy” Truman Andrews, Jr., 86, of Clear Lake, died Sunday, November 29, 2020, at Oakwood Care Center in Clear Lake. A private funeral service will be held in the near future at Ward-Van Slyke Colonial Chapel, 310 1st Ave. N., Clear Lake, with Pastor David Peterson officiating. Burial will be at Memorial Park Cemetery in Mason City. A recording of Andy’s funeral will be available on his tribute page at www.colonialchapels.com. In lieu of customary remembrances, the family suggests memorial contributions to the Juvenile Diabetes Research Foundation in memory of Andy (JDRF Eastern Iowa, 1026 A Ave NE, Cedar Rapids, IA 52406).   Andy was born on September 9, 1934, at Allen Memorial Hospital in Waterloo, IA to Ray and Nina (nee Andrews) Andrews. Andy grew up in Cedar Falls and Mason City but lived for a time with his Uncle Chance in Missouri after his sister Betty Ann contracted and succumbed to polio. Growing up he loved horses and had a pony named Daisy. Andy graduated from Mason City High School with the class of 1952. He was a member of the basketball team and the tennis team. He attended Mason City Junior College and Iowa State College, graduating with a degree in Civil engineering in 1957. In January 1958, Andy joined the Army and completed basic training at Fort Leonard Wood in Missouri. He transferred to the Army Reserves and was classified as a member of the critical skills unit due to his engineering background. He married Barbara Ann Payne on January 3, 1959, at the First United Methodist Church in Mason City. They moved to Clear Lake in 1970. He began working for A&M Prestress in Clear Lake, which became Andrews Prestressed Concrete, Inc. in 1954. In 1958, he became a member of the Precast/Prestressed Concrete Institute (PCI), and helped draft the fire rating standards in conjunction with Underwriters Laboratories and PCI. He became a member of PCI’s board of directors, serving two terms in 1983 and 1991, while also being appointed to their nominating committee. In 2008, he was elected a fellow of PCI and was also a longtime president of the Iowa Prestress Concrete Producers Association. He was always proud to share his 54 years of expertise and experience in the industry with others. Andy was an avid hunter and fisherman. He and son, Aaron, shared special trips over the years. He also loved raising hunting dogs; many of which he trained for hunting competitions. Together, Andy and Barb created many wonderful memories while going on many trips across the world through the years.  Andy loved living on Clear Lake and never took it for granted. Weather permitting, he swam in it every night after work, frequently took the family on boat rides, and taught his children to canoe, sail and drive power boats.  In the winter months he liked to cross country ski and ride snowmobiles.  Tennis and photography were also important hobbies of his. He played in men’s tennis leagues for many years and was always taking photos of his children’s and family’s events.   Andy loved to fly planes, saying it was one of his most pleasurable hobbies. He owned three different planes over the years and also built airplane hangars; one of which is still standing at the Mason City Airport. Later in life he developed a passion for old cars and never stopped searching for the perfect replica of his high school car; a 1939 Nash. He enjoyed driving around Clear Lake in different old cars and was always on his driveway watching the annual car cruise around Clear Lake. He was also an active, dedicated member of Clear Lake United Methodist Church where he often volunteered as an usher. Andy is survived by his wife, Barbara of Clear Lake; children, Valerie (Robert) Wareham of Bettendorf, IA, Aaron (Kristin) Andrews of Mason City and Rebecca (Don) Pedelty of Clear Lake; eleven grandchildren, Kristina, Jeremy, Blake, and Luke Wareham, Mitchell, Michael, Christopher and Lauren Andrews, and Jonah, Samuel and Jacob Pedelty; and sister, Jane (John) Aspnes of Bellingham, WA. He was preceded in death by his parents; and sister, Elizabeth Ann. Andy will be remembered as a leader, designer and visionary in the prestressed concrete industry. He was such a loving husband, proud father and doting grandfather. His family would like to express their sincere appreciation and gratitude to the caring staff at Oakwood Care Center and MercyOne North Iowa Hospice.

The family of Raymond Truman Andrews Jr. created this Life Tributes page to make it easy to share your memories.

Send flowers to the Andrews family.