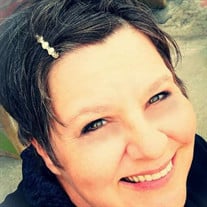 Raelyn K. Welniak, 53, of Ackley and formerly of Nebraska City, passed away Saturday, March 19, 2022 at MeryOne North Iowa Medical Center in Mason City after a courageous battle with cancer. A Celebration of Life will be held for Raelyn at Dunbar School House on April 2nd, 2022 at 2 pm in Dunbar, Nebraska. Floral arrangements may be ordered through Nebraska City Floral. Should friends desire, condolences may be left to Raelyn’s family in care of Hogan Bremer Moore Colonial Chapel, 126 3rd St NE, Mason City. Raelyn Kay Uchytil was born on March 20, 1968 in Nebraska City, the youngest of three children born to Winton and Eileen (Everett) Uchytil. From an early age Raelyn embraced her personality of a free spirit, a trait that guided her throughout her life. She attended Dunbar Elementary School K-6 and Syracuse-Dunbar-Avoca High School in Nebraska where she welcomed her first born son Andy at age 15. She then met Jon Welniak whom she married on December 27th, 1986. After Jon joined the military they moved to Texas where they welcomed Cody and then Josh. Following Jon’s discharge from the military they returned to Nebraska City where they completed their family with the addition of their two youngest children, Brittney and then Lucas. Raelyn was a gifted artist and for many years supported her children through her artwork while working at the hospital and on the ambulance crew. She enjoyed all art but her favorite was free hand painting. Raelyn also enjoyed crafting and traveling. One of Raelyn’s favorite places was the Blue Ridge Mountains of North Carolina, a place that she was able to call home for a little while. And although she loved the peacefulness and beauty of the mountains, she missed being near her children and grandchildren, which brought Raelyn to Iowa. Family had always been important to Raelyn, but no more so than the past seven years as she fought breast cancer, ringing the bell once only to soon learn of its return. She leaned on the love and support of her family to carry her through the hard times. Countless hours were spent with her beloved grandchildren and grandpups; time she wouldn’t have traded for anything. Those grateful in sharing in her life are her children, Andrew Uchytil and his wife, Michele, of Watertown, WI., and their children, Alexis, Bryan, Chase, Ross, Colton, Billy, and Diana; Cody Welniak, of Ackley, IA; Joshua Welniak, of Ackley, IA; Brittney (Chad) Byford, of Ackley, IA, and their son Karson; and Lucas (Peggy) Welniak, of Nebraska City, NE, and their children, Isabella, Bryce, and Christian; Her siblings, Robin (Scott) Lindaman, of Ackley, IA, and Ronnie Uchytil, of Nebraska City, NE; and Donavan(Laura) Ainesworth, of Plattsmouth, NE; five nieces, and three nephews; and Ron(Kathy) Hillman of Otoe, NE, as well as Raelyn’s many friends, and her children’s friends whom she always welcomed into her home with open arms. Raelyn has been reunited in Heaven with her parents, Winton and Eileen; and her paternal grandparents, G.K. and Floy Uchytil; and her maternal grandparents, Leland and Dorothy Everett.

Raelyn K. Welniak, 53, of Ackley and formerly of Nebraska City, passed away Saturday, March 19, 2022 at MeryOne North Iowa Medical Center in Mason City after a courageous battle with cancer. A Celebration of Life will be held for Raelyn at... View Obituary & Service Information

The family of Raelyn Kay Welniak created this Life Tributes page to make it easy to share your memories.

Raelyn K. Welniak, 53, of Ackley and formerly of Nebraska City,...

Send flowers to the Welniak family.