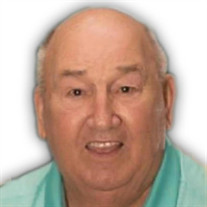 Pete Arnold, 81, of Mason City, died Thursday, July 29, 2021 at his home in Mason City. Mass of Christian Burial will be held 11:00 am Monday, August 2, 2021 at Epiphany Parish - Holy Family Catholic Church, 722 N. Adams Ave., Mason City. Burial will follow in Sacred Heart Catholic Cemetery, Rockwell. A livestream of the Mass will be available on the Epiphany Parish Facebook page. https://www.facebook.com/EpiphanyParishMasonCity Visitation with public viewing will be held Sunday, August 1, at Hogan Bremer Moore Colonial Chapel, 126 3rd St. NE, Mason City from 3:00 pm until 6:00 pm with a Scriptural Wake service beginning at 6:00 pm. In lieu of flowers and customary remembrances, memorials may be left in Pete’s honor in care of his family. Born March 16th, 1940 to Boyd and Lucille Arnold he was one of 9 children. Pete attended McKinley, Lincoln, and Garfield Elementary schools. He attended Roosevelt Junior High and graduated from Mason City High School in 1958. He enlisted in the Army in August 1958 and served as an MP. He was stationed for a year in Korea and was discharged in 1961. While home on leave in 1960, he met his wife to be of 59+ years, Rilla Behr. They married February 24th, 1962 at Sacred Heart Catholic Church in Rockwell, Iowa. To this union, four children were born — Robert, Amy, Pam, and Jennifer. Pete spent most of his working years in sales, specifically in material handling equipment sales. For a short time he had a business in Rockwell. His final job was a lab courier for Mercy Hospital in Mason City. He and Rilla spent their married years in the Quad Cities, Algona, Rockwell, Yuma, AZ, and Mason City, IA. They were members of Sacred Heart Catholic Church in Rockwell where he served on the Parish Council. After moving to Mason City they attended Epiphany Parish - Holy Family Catholic Church. Pete never knew a stranger, just friends he hadn’t met yet. He loved to talk to others and was never short on things to say. Pete was an eternal optimist with a glass half full attitude so it was easy to see why people were drawn to him. Pete loved going to coffee at Shill’s, Hardees, and Monroe Storage. Pete loved to go for rides, anytime of the day or night. His family remembers they would drive by every house and school he ever attended. He loved telling the stories over and over to his family. Time with family, especially children, grandchildren, and great grandchildren brought him much joy. Celebrating holidays and time together with loved ones were his most treasured times. Pete was a Newman Catholic Century Club member, and loved attending Newman sporting event, especially football, baseball, and wrestling. He enjoyed time in Rockwell Saddle Club and family trail rides. He is survived by his wife, Rilla; son, Robert Arnold (Kim Guidry); three daughters, Amy Haskins (Mark Land), Pam Hoskins (Rick Prohaska), and Jennifer (Jeff) Conrad; 15 grandchildren; 11 great grandchildren; siblings, Kathleen Burnett, Dorothy Loterbour, Shirley Gregson, Jackie Swift, Mary McNeil (Bruce); sisters in law, Marilyn Arnold, Sue Behr, Dorothy DeVary, Joni Behr; brothers in law, Lee (Debbie) Behr, Ronnie (Bev) Behr, Paul (Suzanne) Behr, Dennis (Jane) Behr; as well as many extended family and friends. Preceded in death by his parents, in laws, Leroy “Scoop” and Mary Behr; his twin brother, Jim Arnold; sisters, Marilyn Dietz and Peggy Lovik; brothers in law, Bill Burnett, Alan Loterbour, Rich Gregson, Dick Swift, Chuck Behr, Jim DeVary; and sister in law, Jo Behr; and son in law, Randy Haskins, who was like a son to Pete. Pete and the Arnold family wish to thank the Fresenius Kidney Care staff and Dr. Thangaraj for their excellent care of Pete over the last years. And thank you to Hospice of North Iowa for their care and support in Pete’s final days.

The family of Pete Arnold created this Life Tributes page to make it easy to share your memories.

Send flowers to the Arnold family.