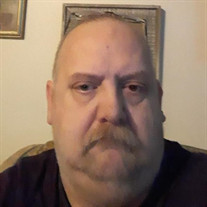 Paul D. Henkle, 57, of Mason City and formerly of Waverly, IA passed away on Thursday, October 7, 2021 after a lengthy battle with health issues. A celebration of his life will be held Sunday, November 28, 2021 at the All Vets Center, 1603 S Monroe Ave, Mason City, IA 50401. Paul David Henkle was born December 29, 1963 in Waverly, IA, the son of Robert and Rebecca (Hirsch) Henkle. He earned his education at Waverly High School, graduating in 1982. Following graduation, in 1985 Paul began his service in the United States Navy on the USS Hunley (AS-31) and served his crew mates in the galley. During his service he received a Sea Service Deployment Ribbon and a Meritorious Unit Commendation Award before his honorable discharge in 1988 as an MSSN. Life took Paul to Waverly where he made his home until he met Kellie Hill and he moved to Seattle, WA. Though the couple went their separate ways, he and Kellie and her family remained close over the years. Eventually Paul returned to Charles City with his sister, Jessica before moving to Mason City, with his four legged feline companion, Leo, where he met his best friend and caregiver Michele. Later Paul adopted Angel, whom he loved dearly. Recently, Paul was working at Affordables, where he made numerous friends. Paul loved movies and TV shows and had a huge collection of DVD’s and CD’s to show for it. He enjoyed collecting, and found great joy reminiscing in each of his collections. Those left to cherish his memory are his two brothers, Joshua (Briyaunna) Henkle and a niece or nephew on the way, of Waterloo; and Robert “Bobby” Henkle Jr. and a niece Rozalynn and nephew, Jayson Henkle of Cedar Falls; friends, Michele Wells of Mason City and Kellie Hill and her children of Seattle, WA. Preceding him in death are his parents, Robert Henkle and Rebecca L. Hirsch; a sister, Jessica Henkle. Hogan-Bremer-Moore Colonial Chapel, 126 3rd St. NE, Mason City, IA 50401. 641-423-2372. ColonialChapels.com

Paul D. Henkle, 57, of Mason City and formerly of Waverly, IA passed away on Thursday, October 7, 2021 after a lengthy battle with health issues. A celebration of his life will be held Sunday, November 28, 2021 at the All Vets Center, 1603... View Obituary & Service Information

The family of Paul D. Henkle created this Life Tributes page to make it easy to share your memories.

Send flowers to the Henkle family.