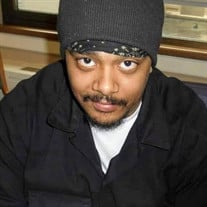 On Saturday, January 30th, 2021 at 33 years of age, my husband passed away, ending his lifelong battle of depression. See he never got the help he needed, due to the stigma that comes with mental health and drug addiction. And because of that the world lost a person who was so damn beautiful, and half of them never even knew it. OJ was creative, and skilled in many ways. He produced instrumentals, and recorded rap in his younger days. As he aged his love of music never faded and at 29 he picked up guitar after I bought him one for Father's day. He practiced religiously. I used to give him songs to learn, and I remember when he surprised by secretly learning and then giving me a performance of the Game of Thrones opening song. OJ was also a skilled artist, poet, and he even wrote a screenplay for a new Rocky Movie. He loved everything horror, especially old school slasher films. OJ was a good guy, with a humongous heart, and if you had his love, you had it forever. His laugh was infectious abd his smile gleaming. He was incredibly unique, the weirder you were the more he liked you. A quote I was told many years ago by our best friend Lacy was this "I like being around OJ, because I can be as Lacy as I want and never have to worry about it." This was one of the most profound, and accurate statements, that anyone has ever made about him. As for his children, he was the best dad. He loved his kids endlessly, once selling his Xbox and games for Christmas and just the last Christmas he sold his guitar. He'd drop everything, even if we were fighting, for his kids, and was constantly looking at them with such pride. His babies he's left behind are 6 year son, OJ Houston III, and 2 year old baby girl, Naomi Rose Marie Houston. Visitation will be held Thursday, February 25, 2021 from 4 pm until 7 pm at Hogan Bremer Moore Colonial Chapel, 126 3rd St. NE, Mason City. Condolences may be directed to the funeral home in care of the Houston Family.

On Saturday, January 30th, 2021 at 33 years of age, my husband passed away, ending his lifelong battle of depression. See he never got the help he needed, due to the stigma that comes with mental health and drug addiction. And because of that... View Obituary & Service Information

The family of OJ Houston Jr. created this Life Tributes page to make it easy to share your memories.

Send flowers to the Houston family.