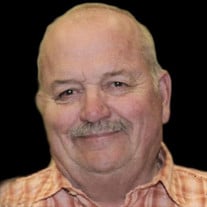 Norman Dean Spooner, 73, of Nora Springs, IA, passed away Friday, December 11, 2020, at MercyOne North Iowa Medical Center, due to heart complications. A graveside inurnment will be held at 1:30 p.m. Friday, December 18, 2020, at Park Cemetery in Nora Springs, with Pastor Dave Werges officiating. Visitation will be held from 11:00 a.m.-1:00 p.m. Friday at Sheckler Colonial Chapel, 114 N. Hawkeye Ave., Nora Springs. Norman was born on August 19, 1947, in Newman Grove, NE to Howard A. Sr. and Mayvis I. (Jacobson) Spooner. Due to his father’s involvement in the Navy, Norman’s family moved between Nebraska and Virginia, finally settling in Iowa. He graduated from North Central High School in Manly, IA in 1966. He was active in basketball and football. He was known as GUNNER for his shooting ability on the basketball court. A few years after high school he joined the Iowa National Guard. In the early 1970s he played fast-pitch softball in Hanlontown. He also enjoyed golfing and would still talk about his two holes-in-one at Pine Creek Golf Club in Mason City. Norman married Cindy (Tarr) Rezab on August 30, 1974. From that union they had a daughter, Kendra, and he gained two sons, Scott and Todd. Cindy passed away in 1983 and Norman continued to reside in Nora Springs. He met Verona (Beyer) Spooner in 1985 and they were married on July 19, 1986. From that marriage he added another son, Jason, and daughter, Deanna. He worked various jobs including Winnebago, LifeTime Motorhomes, White Farm and Central Springs High School, but Electrolux was Norman’s career. He enjoyed meeting and talking to people, even up to the day he passed. Norman’s greatest joy in life was his family. He enjoyed attending many school functions but loved to watch his children and grandchildren play volleyball, football, basketball, wrestling, softball and baseball. He was also a lifelong Green Bay Packers and Iowa Hawkeyes fan, and never shied away from being the life of the party. Norman is survived by his wife, Verona; children, Deanna Rodriguez (Kenny Siegel), Jason (Sandy) Hardwick, Scott (Julie) Rezab, Todd Spooner (Nancy Horstman) and Kendra (Ryan) Kelley; siblings, Howard (Christina), Caryl (Bob) Churchill, Marlene (Brad) Rick and Cindy (Don) Stephenson; 18 grandchildren; 8 great-grandchildren; and many nieces, nephews and in-laws, too numerous to mention. He was preceded in death by his parents, his first wife, Cindy and his sister, Melba Heagel.

The family of Norman Dean Spooner created this Life Tributes page to make it easy to share your memories.

Send flowers to the Spooner family.