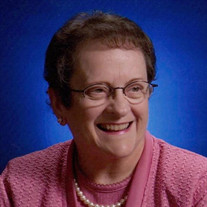 Neva J. Bitker passed away just days before her 85th birthday on Wednesday, December 8, 2021, at the IOOF Home in Mason City. A memorial service will be held 11:00 am Monday, December 13, 2021 at Hogan Bremer Moore Colonial Chapel, 126 3rd St NE, Mason City. Inurnment will follow in Memorial Park Cemetery, Mason City at a later date. Neva's family will greet relatives and friends beginning one hour prior to her service at the funeral home on Monday. Neva Bitker was born December 12, 1936 to Charles and Gladys (Kimmel) Bouline of Clear Lake, Iowa. Having grown up in the Clear Lake area, she attended Clear Lake Schools. On July 30, 1953 she married DuWayne Bitker in Yankton, South Dakota. They made their home in Albert Lea. From this union they had three children: Daniel, Randy, and Ronald. They moved back to the Clear Lake area and together they farmed the Bitker Family Century Farm north of Ventura for many years. In 1993 Neva and DuWayne moved to Mason City. Neva enjoyed genealogy, sewing, painting, and woodworking. She was an active member of Our Savior's Lutheran Church where she was on the Altar Guild, enjoyed Quilting Club and assisted with many funerals. Neva also volunteered as a Resident Advocate at the Heritage Care Center while DuWayne spent the last several years of his life. She was part of the North Side Jolly Club and a grateful member of Alanon. Neva loved her family! She cherished time with her children, grandchildren, great grandchildren, and great great grandchildren. Those left to cherish her memory are her three children Daniel (Sally) of Garner, Randy (Jayne) of Clear Lake and Ronald also of Clear Lake; four grandchildren Toni, Kelly, Krista Bitker and Adam (Kaylara) Palmer; several great grandchildren and great great grandchildren; her sister, Patricia (David) Klinge of Clear Lake; and sisters in law, Phyllis Rosendahl, Sharon Kramer, Maria “Ria” Bouline, Sherry Bitker, and Calliope Bitker; brother in law, Loren Bitker; as well as numerous nieces and nephews and other extended family members. Preceding her in death are her husband, DuWayne; parents, Charles and Gladys; brother, William "Bill" Bouline; and grandson, Dustin Palmer.

The family of Neva J. Bitker created this Life Tributes page to make it easy to share your memories.

Send flowers to the Bitker family.