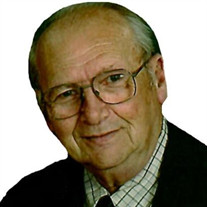 Neil Hershey, 92, of Mason City, passed away Tuesday, January 26, 2021 at his home in Mason City. A private funeral service will be held 10:30am Monday, February 1, 2021 at First United Methodist Church, 119 South Georgia, Mason City, with Reverend Carol Kress officiating. Following the service military honors will be conducted by the Mason City Veterans Honor Guard. Burial will be in Elmwood St. Joseph Cemetery, Mason City. A live stream of Neil’s service will be available on the First United Methodist Church Mason City Facebook page. Visitation will be held 2:00 to 4:00 p.m. Sunday, January 31, 2021 at Hogan-Bremer-Moore Colonial Chapel, 126 3rd Street NE, Mason City. Memorial contributions may be directed to the family and a charity will be established at a later date. Neil was born August 17, 1928 in Bristow, Iowa, son of Elmer and Nita (Pfaltzgraff) Hershey. He graduated from Sheffield High School class of 1946. After high school, he worked for Sheffield Brick and Tile for two years. In 1948, he was drafted into the Army and served in Germany and Austria and was honorably discharged in 1951. After his service, he worked in his father’s grocery store, Hershey’s Market, in Sheffield. Neil was united in marriage to Dorothy Earles on May 23, 1954 in Sheffield and to this union seven children were born. Neil and Dorothy lived in Sheffield for four years and then made their home in Mason City in 1959, where they raised their children. When moving to Mason City, he worked for Osco Drug for many years until their closure. After Osco Drug, he worked for Drug Town for several years until his retirement. Neil was an active member of the First United Methodist Church in Mason City. During his younger years, Neil enjoyed dancing to the Big Band music, and especially “In The Mood”. He liked spending time outside, tinkering on the cars, house and tending to his garden. He liked to watch boxing, his western movies, and all various kinds of sports. He loved spending time with his extended family. Neil is survived by his wife, of 66 years, Dorothy Hershey of Mason City; seven children, Tony Hershey of Ackley, Tina Hershey of Mason City, Dan (Lynae) Hershey of Prior Lake, MN., Jim Hershey of Forest City, Todd Hershey of Cedar Rapids, Kaylene (Jay) Koerber of Mason City and Doug (Teresa) Hershey of Mason City; fifteen grandchildren, seven great grandchildren and many extended family and friends. He is preceded in death by his parents, Elmer and Nita Hershey; brother, Russel Hershey; sister, Sharon Deyoung and grandson, Josh Hershey.

The family of Neil L. Hershey created this Life Tributes page to make it easy to share your memories.

Send flowers to the Hershey family.