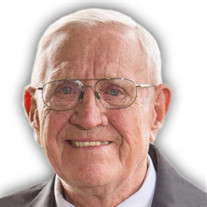 Naven Judine Knutson, 89, of Clarksville, Tennessee, formerly of the Leland/Lake Mills area in Iowa, died Thursday, April 8, at the Vanderbilt Medical Care Center in Nashville, TN. A graveside committal service will be held 11:00 a.m. Thursday, May 6, 2021 at Elk Creek Lutheran Cemetery, 4108 Killdeer Ave, Kensett, IA 50448 with Rev. Tom Martin officiating. A Celebration of Life gathering will be held immediately following the graveside in the fellowship hall of Elk Creek Lutheran Church until around 2:30 p.m. Naven Judine Knutson was born on August 6, 1931, in Mason City, Iowa, the son of Eddie and Myrtle (Brudvig) Knutson. Naven graduated from Blooming Prairie High School in 1949, and graduated from San Francisco State University, in San Francisco, California. He was united on Sep. 2, 1956 in marriage to Doris Elaine Johnson (deceased), in Blooming Prairie, Minnesota. They lived in California from 1956 to 1975 and in Alaska from 1975 until 1992. Settling in Clarksville, Tennessee in 1992. Naven was a noted athlete in high school; served his country during the Korean War; was a recognized expert in his field of accounting; a loving husband, father, grandfather , and great grandfather; and a friend to everyone he met. Left to cherish his memory are his two sons, Naven John Knutson and his wife Janey of Arab, AL., and Paul Edward Knutson and his wife Trudy of Frankfort, Kentucky; four grandchildren; Elaine Knutson Wanstreet & her husband Gavin of West Lafayette, IN; Mary Knutson Lawlor and her husband Lucas and daughters Lydia, Cora, and Emma of Huntsville, AL; Anna Knutson and her son Matthias of Arab, AL; Naven E. Knutson, his wife Carmen & son Naven L. of Frankfort, KY; his brother David Knutson & wife Ethel of Cedar Rapids, Iowa and sister Elinor Dalchow and husband LeRoy of Milaca, MN. Naven was preceded by his sister Marilyn Thomas and brother Robert Knutson. The Family would like to give a special thanks to John Wallace, a special friend and neighbor for his companionship and help during Naven’s final years. Conner Colonial Chapel. 1008 1st Ave S. Northwood, IA 50459. (641) 324-1543. ColonialChapels.com

The family of Naven Knutson created this Life Tributes page to make it easy to share your memories.

Send flowers to the Knutson family.