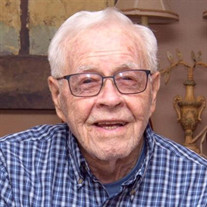 Mervin “Merv” J. Dirksen, 93, of Clear Lake passed away Saturday, April 24, 2021 at the Oakwood Care Center in Clear Lake. A Funeral will be held 1:30 p.m. Friday, April 30, 2021 at Ward-Van Slyke Colonial Chapel, 310 1st Avenue North, Clear Lake, IA. Mervin will be laid to rest beside his wife, Joan, at Memorial Park Cemetery in Mason City. Visitation and public viewing will be from 4:00 p.m. to 6:00 p.m. Thursday, April 29, 2021 at the funeral chapel. Visitation will also continue one hour prior to the service on Friday. Memorials may be directed to Zion Lutheran Church in Clear Lake in Merv’s honor. Mervin John Dirksen was born March 17, 1928 in Kanawha, Iowa the son of Reinerd and Adele (Heesch) Dirksen. Growing up in the Kanawha area, Mervin graduated from Kanawha High School in 1945 and enlisted into the United States Army, serving his country while stationed in Japan until his honorable discharge. On October 20, 1951 he married Joan Smith in Garner and the couple was blessed with two sons, Scott and Kevin and the family made their home in Des Moines and later in Ankeny. Mervin continued his education at the American Institute of Business in Des Moines, graduating in 1953. For 33 years he worked at Blue Cross Blue Shield, making his way from Manager to Vice President before his retirement in 1989. Soon after, Joan and Mervin made their home permanently in Clear Lake. Time spent outdoors brought Mervin joy, whether it was boating, fishing or golfing. His greatest joy was becoming a grandfather, and later a great-grandfather. Times spent with the grandchildren working on projects around the lake house and day trips were treasured. He and Joan were longtime members of Zion Lutheran Church in Clear Lake. Those left to cherish his memory are his sons, Scott Dirksen of Clear Lake and Kevin (Dawn) Dirksen of Mason City; grandchildren, Matthew (Kaleigh) Dirksen and Stefan Dirksen; great-grandson, Finn Dirksen; as well as nieces, nephews, extended family members and friends. Greeting him in Heaven are his wife, Joan who passed in 2013; his parents, Reinerd and Adele Dirksen; and siblings, Raymond Dirksen and Serena Helton.

The family of Mervin "Merv" J. Dirksen created this Life Tributes page to make it easy to share your memories.

Send flowers to the Dirksen family.