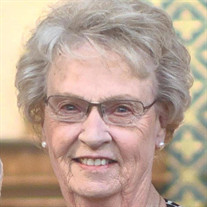 Mary Ann Watson, 84, of Clear Lake, passed away on Wednesday, March 17, 2021, at MercyOne North Iowa Medical Center, in Mason City. Funeral services will be held at 10:30 a.m. Saturday, April 10, 2021, at Clear Lake United Methodist Church, 508 2nd Ave. N., with Pastor David Peterson officiating. Burial will be at Pleasant View Cemetery in Thornton. Visitation will be held from 4:00-7:00 p.m. on Friday, April 9, 2021 at Ward-Van Slyke Colonial Chapel, 310 1st Ave. N., Clear Lake and also one hour prior to the service at the church on Saturday. Memorials may be directed to the Clear Lake United Methodist Church or Alzheimer’s Association. Mary Ann was born to Severt and Mary Mathre on Sept. 24, 1936, at Story Hospital, in Mason City. She was the youngest of five children.  She attended Mason #7 country school from kindergarten through eighth grade and graduated from Mason City High School in 1954.  She met Delbert Watson at a gathering of RYP (Rural Young People) and they were married on Sept. 1, 1957, at the Clear Lake United Methodist Church. Mary Ann and Delbert lived in Mason City for a brief time before moving to their farm south of Clear Lake, where they raised their four children, Mike, Linda, Janet and Brad.  Mary Ann and Delbert were partners in every way and worked side by side on the farm  they both loved.  Mary Ann spent many hours running a tractor, taking lunch to the field and being a supportive spouse. While her children were still at home, she supported them in their many activities, and following that time, she supported her grandchildren in their activities.  Mary Ann also loved her community and was an active member in the Thought and Thimble Club and the United Methodist Women.  She also served on the North Iowa Fair Board for a number of years. Mary Ann and Delbert were members of the NIVA Car Club and spent many happy hours driving their vintage cars on trips and in parades. Mary Ann was a kind and gentle woman who led by example.  She loved nothing better than spending time with her children, grandchildren and great-grandchildren.  She was always ready for a social gathering, whether it be a great-grandchild’s birthday party, having lunch with her friends, or a wiener roast on the farm. Mary Ann lived on the farm until six months ago, when she moved to Timbercrest Apartments in Clear Lake. She is survived by her children, Mike Watson, Linda (Brent) Scarrow, Janet (Randy) Brager, and Brad (Michelle) Watson, all of Clear Lake; grandchildren, Andy (Melissa) Scarrow, Dawn (Charlie) Scott, Dan (Meryl) Scarrow, Steve (Ashley) Scarrow, Laura (Brendan) Daly, Emily (Ben) DuBose, Molly Brager, Megan (Jason) Dennis, Scott Watson, and Joel (Kilah) Watson; 16 great-grandchildren and one expected in July; siblings, Jean Biederman and Roger (Pat) Mathre; brother and sister-in-law, Jerry and Judy Watson; sister-in-law, Nadine Mathre; brother-in-law, Gene Ferden; and many nieces, nephews and cousins. She was preceded in death by her husband of 55 years; parents; parents-in-law, Gerald and Nellie Watson; sister, Florence Ferden; brother, Dick Mathre; sister-in-law, Ardella Boldt; brothers-in-law, Robert Biederman, Jim Turner and Ralph Boldt; and two great-grandchildren.

The family of Mary Ann Watson created this Life Tributes page to make it easy to share your memories.

Mary Ann Watson, 84, of Clear Lake, passed away on Wednesday,...

Send flowers to the Watson family.