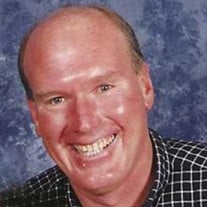 Mark Christopher Kemmerer, 66, of Clear Lake, died Tuesday, February 8, 2022, at MercyOne North Iowa Medical Center in Mason City. A Celebration of Life will be held from 4:00-7:30 p.m. Tuesday, February 15, 2022, at Ward-Van Slyke Colonial Chapel, 310 1st Ave. N., Clear Lake. A graveside inurnment will be held at 10:30 a.m. Wednesday, February 16, 2022, at Clear Lake Cemetery with Mark Doebel officiating. In lieu of customary remembrances, Mark’s family suggests memorial contributions to the Cerro Gordo Humane Society. Mark was born August 30, 1955, the son of Dean and Martha Mae (Erickson) Kemmerer in Mason City. He married Linda Gossman on October 19, 1990. A graduate of Clear Lake High School, class of 1973, Mark began working for his father while still in High School and remained in his father’s employment until he purchased the business in 1975. His parents had purchased the business formerly known as Witkes Marina in 1960 and relocated east of Clear Lake, naming it Kemmerer Marine. He took great pride in his craft and abilities as a master boat mechanic. Mark had many passions, he loved restoring vintage things to a finite detail. He was meticulous in his pursuit of perfecting them back to original condition. He did this with boats, snowmobiles, cars, and any interest he wished to pursue. He had several meat smokers, a tomato garden producing cases of salsa that they would give away, generations of wood fire pizza ovens, and would drive 100 miles to purchase bread dough or cheese because it was the best in the region. He took every passion to a commendable conclusion. He enjoyed 50’s and 60’s music and was always attending Buddy Holly celebrations with a knowledge of his father’s Highway Patrol assistance in that tragedy. Mark was a member of and sponsor of the North Iowa Snow Seekers, Jack Helgren Memorial Snowmobile Race and North Iowa Grass Drag Nationals. He enjoyed vintage cars and boats, taking snowmobile trips and playing the ultimate host while cooking brick oven pizzas and smoking a variety of cuts of meat. He loved and cherished the many trips he and Linda took while creating memories through the years. Mark is survived by his nephew, niece and many close friends and business associates. He was preceded in death by his parents; and brother Kurt.

The family of Mark Christopher Kemmerer created this Life Tributes page to make it easy to share your memories.

Send flowers to the Kemmerer family.