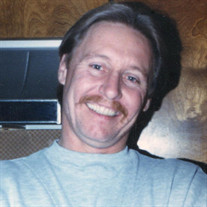 Mark Darwin Grattidge, 69, of Clear Lake, died Wednesday, August 18, 2021, at his home. Funeral services will be held at 12:00 p.m. Friday, August 27, 2021, at Ward-Van Slyke Colonial Chapel, 310 1st Ave. N., Clear Lake with Mark Doebel officiating. Burial will be at Clear Lake Cemetery, where military honors will be provided by the Clear Lake VFW Post 4868 Honor Guard. Visitation will be held one hour prior to the service at the funeral home. In lieu of customary remembrances, family suggests memorial contributions to the Humane Society of North Iowa. Mark was born August 24, 1951, the son of Dick Darwin and Helen Louise (Baker) Grattidge in Mason City. He married Christie Ann Hansen on December 13, 1990, in Las Vegas, NV. She preceded him in death on November 13, 2016. Mark grew up and attended school in Clear Lake. He entered the United States Air Force on June 25, 1969, and served during in Vietnam War until his honorable discharge on October 19, 1971. For 40 years he worked as a journeyman pipe-fitter. Mark was a member of the Clear Lake VFW Post 4868 and past member of Local 33 Pipe-fitters Union. He was very proud of being from Clear Lake and always enjoyed boating, giving friends and family tours of the lake, and celebrating the Fourth of July. Anyone who knew him also knew he loved his cats. Mark is survived by his sisters, Vicki Willis, Cathy Johnson and Lisa (Dale) Goodman all of Camanche, IA; brother, Barry Grattidge of Mascot, TN; nieces and nephews, Tod (Christy) Willis of Ketchikan, AL, Trevor (Kim) Willis of Camanche, Brent (Marie) Willis of Emmett, ID, Jenn (Jeff) Neumann of Camanche and Andy (Jess) Linder of Gilbert, AZ; and many great-nieces and great-nephews. He was preceded in death by his parents; wife Christie (Nov.13, 2016; paternal grandparents, Harold and Kathryn Grattidge; maternal grandparents, Myron and Olive Baker; special aunt, Nancy Cox-Munyon and special uncle, Babe Cox. As well as Aunts and Uncles on the Baker side.

The family of Mark Darwin Grattidge created this Life Tributes page to make it easy to share your memories.

Send flowers to the Grattidge family.