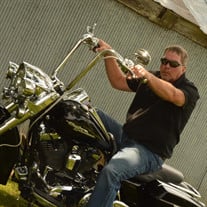 Mark Allen Achenbach, 58, of Rockford, Iowa passed away February 22, 2022, at home surrounded by his loving family. Mark passed just a few days shy of his 59th birthday after a long hard fought battle with cancer. Visitation will be held from 4:00 p.m. to 7:00 p.m. on Sunday, February 27, 2022, at Sheckler Colonial Chapel, 114 N. Hawkeye, Nora Springs, Iowa. Per Mark’s wishes and the family’s request, please come in casual dress. Mark Allen Achenbach was born 2-25-63 to Andy and Connie (Green) Achenbach at Floyd County at Cedar Valley Hospital in Charles City, Iowa. He attended school in Rockford, graduating in 1981. Mark married the love of his life, Karen Dodge, on June 30, 1984. The couple made Rockford their home and together they raised two daughters; Amanda and Andi Lee. Upon graduation, Mark became a skilled mechanic and opened his own full service gas station in Rockford, Mark’s Service. After closing the station, Mark worked at SeaBee’s in Hampton, Iowa and ended his career as a diesel mechanic at CHS in Mason City, Iowa. Mark was a simple, quiet man who could most often be found in his shop on the farm fixing something for someone, with his dog always close by. He was a well respected mechanic in the area, not meeting many machines he couldn’t fix. He enjoyed when friends would stop over and drink a few cold ones with him, and he loved a good cruise through the countryside to check in on things and to see all the wildlife. In his younger years, Mark enjoyed demolition derbies, dirt track racing with his friends, and racing his Camaro. His Harley-Davidson, and all its polished chrome, brought him and Karen much enjoyment in the years before his diagnosis. What made Mark the most happy in his life was his family. He was a proud father and did everything he could to ensure his daughters could do all things boys could do. He was very proud that the first car Amanda drove to school was his ‘69 Camaro, followed by Andi Lee driving his big, white Dodge truck. He loved deer hunting, especially when Andi Lee began hunting with him, a forever dream of his. He loved fishing with Karen and his girls, and hated if he happened to be outfished by them. Mark’s happiest moments were those that made him a “Big Papa.” His first grandchild Mila will forever be the one who made him most happy in the world, as he loved being a grandpa. “You Bet!” He loved to hear how Keaden and Kinley were doing in sports and would call most Monday’s to get a weekend report of how they did. He will be remembered as a good husband, a proud father, and the best “Big Papa” around. Mark will be greatly missed by his wife of 37 years, Karen; daughters, Amanda (Jared) Bahnsen and Andi Lee (Justin) Stewart; three grandchildren: Keaden and Kinley Bahnsen and Mila Stewart; parents, Andy and Connie Achenbach; sister, Teri (Chuck) Chapman; father and mother-in-law, Bill and Bonnie Dodge; sisters-in-law: Cindy (Rick) Bever, and Billi Ka Dodge; brother-in-law, Kevin Dodge; and beloved aunts, uncles, nieces, nephews, cousins, and many other family members and friends. He was preceded in death by his grandparents and a few good dogs.

Mark Allen Achenbach, 58, of Rockford, Iowa passed away February 22, 2022, at home surrounded by his loving family. Mark passed just a few days shy of his 59th birthday after a long hard fought battle with cancer. Visitation will be held from... View Obituary & Service Information

The family of Mark Allen Achenbach created this Life Tributes page to make it easy to share your memories.

Send flowers to the Achenbach family.