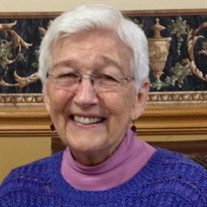 Marjorie E. Bruland, 96, of Mason City passed away peacefully Tuesday, December 14, 2021 at Good Shepherd Health Center in Mason City. A Memorial Service will be held 1:00 p.m. Monday, December 20, 2021 at Trinity Lutheran Church, 213 N Pennsylvania Ave, Mason City, IA 50401 with Rev. Kathy Graves officiating. Marjorie will be laid to rest in West Fork Cemetery, rural Dougherty, IA. The family will greet friends and relatives one hour prior to the funeral at the church. Memorials may be directed to Waldorf College in Forest City, IA, or Trinity Lutheran Church in Mason City, IA. Marjorie Elvira Hovey was born on June 13, 1925, the daughter of Samuel and Martha (Johnson) Hovey in Badger, Iowa. She attended Eagle Grove High School, later earning her teaching certificate and working at a country school for two years. Marj went on to continue her education at Waldorf College, and it was here she met Cliff Bruland, a young Veterans Counselor at the college. On December 29, 1948 Marjorie was united in marriage to Rev. Clifton Bruland in Badger. Together they would be blessed with three daughters, Kathryn, Martha, and Ruth. Life took Marj and Cliff to Brooklyn, NY for a few years before Cliff was called back to active duty in the Navy. Marj and daughter Kathy returned home to Badger to be with family. After Cliff’s discharge from the Navy they made their home in Oakland, CA, Decorah, IA, Calamus, IA, St. Louis, MO, Forest City, IA, and Southern California before returning to Iowa, following where ever Cliff's ministry led them. The couple made their home and semi-retirement in Mason City where Marj was very involved at Trinity Lutheran Church and where Cliff served as visitation pastor. Marj was generous and kind, a strong woman of faith. She loved people and was devoted to family. She was a very accomplished seamstress and lovingly passed on her skills to her daughter Kathy. She was Cliff's partner in ministry and with grace welcomed guests to her table from all over the world. She will be missed by all who knew her. Those left to cherish her memory are her daughters, Kathryn (David) Alden of Dougherty, Martha (Jerry) Koch of Sheffield, and Ruth (Ticia Bracher) Bruland of San Diego, CA with family Charlie Snyder, Alex (Gia) Snyder, Terra (Paul) King and children Braden and Abby King; sister-in-law, Mary Hovey; sister-in-law Ruth Bruland Korn; as well as nieces, nephews and numerous extended family members. Greeting her in Heaven are her husband, Rev. Cliff Bruland; parents, Samuel and Martha; siblings, Sam Hovey, James "Jim" (Eileen) Hovey, Thora (Al) Olson, Sherman (Bernice) Hovey, Conrad (Bernice) Hovey; son-in-law, David Winter; grandson, Roger Alden; nephews, Steven, Bruce, Greg and Roger Hovey.

The family of Marjorie E. Bruland created this Life Tributes page to make it easy to share your memories.

Send flowers to the Bruland family.