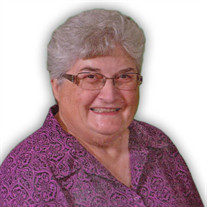 Marilyn M. Hamand, 81, of Nora Springs passed away Monday, December 13, 2021 at MercyOne North Iowa Medical Center with her family at her side. The family will hold private services in her honor. Public visitation and viewing will be held from 4:00 p.m. to 6:00 p.m. on Thursday, December 16, 2021 at Sheckler Colonial Chapel, 114 N. Hawkeye, Nora Springs, IA 50458. Masks will be required at all times during the visitation. In lieu of flowers, memorials may be directed to the American Cancer Society or Hospice of North Iowa. Marilyn Marie Peter was born May 12, 1940 in Nora Springs, the only child of Arthur Henry and Ruby Madell (Behne) Peter, her entire grammar and secondary school days were spent in the Nora Springs Community School District, from which she graduated in 1958. She graduated from Allen Memorial Hospital Lutheran School of Nursing in Waterloo in 1961, passed the state’s licensing examination for registered nurses in October of that year and worked for several years, retiring when her children were young. She continued to volunteer for a time to the Red Cross Bloodmobiles, and was a volunteer at the Mercy Medical Center. She was a member of the Floyd County Porkettes in the 1980’s and 90’s and was a member of the Nora Springs Historical Society She was baptized in her home at a young age by WF Ellerbeck, pastor of the Nora Springs EUB Church and became a member of that church on April 18, 1954, at the age of 13. She was married to Ralph W. Hamand in the Nora Springs Methodist Church on May 27, 1961, by Rev. Vernon C. Overturf, pastor of the Nora Springs EUB church, where she was a member until the family joined the Nora Springs United Methodist Church in 1967. Marilyn was a longtime member of the UMW, periodically serving on committees, teaching Sunday School, and singing in choir. In April 2010 she and Ralph joined Wesley United Methodist Church. After the passing of her father in 1965, Marilyn and her family moved to her mother’s farm, where, with her husband, they began to farm. For several years she was active in cub scouting as a den leader and den leader coach and served two terms on the Floyd County 4-H committee. She served on the board of directors of Maple View Manor, the Floyd County Porkettes and a term on the Nora Springs Historical Society Board of Directors. In her spare time, Marilyn enjoyed knitting, crocheting, counted cross-stitching, reading and playing the piano. For several years she played clarinet in the City Band. She enjoyed vacations to Canada, in their timeshares and in later years in their motor home in Texas, during wintertime. Those left to cherish her memory are her husband of 60 years, Ralph W. Hamand; sons, Ralph A. (Kimberly) Hamand and David A. (Tracy) Hamand of Nora Springs; grandchildren, R. Justin (Nicole) Hamand, David C. (Kaycee) Hamand, Cory J. Hamand, Colton M. (Maddy) Hamand, and Elizabeth Hamand; great-grandchildren, Ryan, Hailey, Klinton, Konner, and Carver; as well as numerous cousins, and extended family members. Preceding her in death are her parents, Arthur P. and Ruby B.; a granddaughter, Jennifer Marie Hamand in 2007; and a nephew, Brian Hamand. Sheckler Colonial Chapel. 114 N. Hawkeye, Nora Springs, IA 50458. (641) 749-2210. ColonialChapels.com

Marilyn M. Hamand, 81, of Nora Springs passed away Monday, December 13, 2021 at MercyOne North Iowa Medical Center with her family at her side. The family will hold private services in her honor. Public visitation and viewing will be held from... View Obituary & Service Information

The family of Marilyn Marie Hamand created this Life Tributes page to make it easy to share your memories.

Send flowers to the Hamand family.