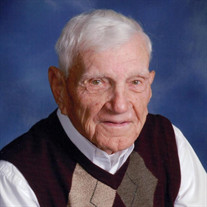 Marcus Albin “Stub” Bartusek, 95, from Manly, IA, passed away on Sunday, August 15, 2021, at Good Shepherd Care Center, Mason City, IA. A Funeral service will be held 10:30am Friday, August 20, 2021, at Bethel United Methodist Church, 503 S East St, Manly, IA, with Rev. Linda Johnson Prestholt officiating. Burial will take place at Manly Cemetery where Military Honors will be performed by the Edward Tosel Post 110. Visitation will be held from 5:00pm to 7:00pm on Thursday, August 19, 2021, at Bethel United Methodist Church, 503 S East St, Manly, IA. Memorials may be directed in Stub’s name to Edward Tosel Post 110 and Bethel United Methodist Church in Manly. In these uncertain times, please feel free to wear masks for those who are unvaccinated, vulnerable and immune compromised. Thank you for understanding. Stub was born on September 16, 1925, the son of Albin and Mary (Seidel) Bartusek of Manly, IA. He was a graduate of Manly High School’s Class of 1944, his mother actually walked for him at graduation because he was already drafted in the US Army during WWII. Stub served our grateful country until March 1946, where he was in the Ardennes (Battle of the Bulge), Rhineland, and Central Europe Campaigns. Throughout his military career he attained Bronze Star with Oak Leaf Cluster, the Belgian Fourragere (along with many others) and in October of 2018 he received the French Legion of Honor from the French Consulate. Stub wasn’t one to share his War stories, that was until he went on the Honor Flight in September 2009 and a WWII Battlefield Tour in 2016 with family, which enlightened some of his memories. After those trips, he shared endless experiences that his family will share for generations to come. On June 23, 1955, he married Patsy Nasheim in Manly, from this loving union three children were born. For 17 years Stub worked on the Rock Island Railroad, and for over 22 years he worked for the Iowa Department of Transportation in Manly and Hanlontown as the Maintenance Supervisor, before retiring in 1986. He was an active member of the Manly community, serving on the City Council, Volunteer Fire Department, Meals on Wheels, and the Manly Taxi. For over 75 years Stub was an active member of the American Legion and former Post Commander. When Stub had free time to spare he could be found camping, traveling, trout fishing, vegetable gardening, bike riding and walking. He was also an avid Packers and Hawkeye fan. Stub often enjoyed getting a Butterscotch Malt (his favorite) from Birdsall's Ice Cream in Mason City. Those left to cherish memories of Stub are his children, Lori (Hugh) Hansen, Sherri (Chuck) Schafer, Marc (Kim) Bartusek; grandchildren, Nikki (Mike) Johnson, Carrie Hansen, Amanda Bachman, Megan Bachman, Kelsie (Kiley) Zimmerman, Emily (Jordan) Mondt, Bethany (Jason) Grabe, Marek Bartusek, and Sierra Bartusek; great grandchildren, Rylan, Trey, Ashton, Harper, Carter, Korbyn, Kaiser, Greyson, Colvin, Cora, Ivy, Lucy, and Julian; sister-in-law, Lucy Schlotterback; as well as numerous nieces, nephews and great friends. Stub is preceded in death by his wife, Patsy, who passed away in 2009; his parents; step-father Homer Schlotterback; siblings, Robert, Jacob Schlotterback, Cora (Robert) Grefe, Maude Evans, Bertha (Infancy), and Florence (Infancy). For those who are unable to attend the funeral service, a livestream will be held at the time of the service at https://www.facebook.com/HoganBremerMooreColonialChapel/

The family of Marcus Albin "Stub" Bartusek created this Life Tributes page to make it easy to share your memories.

Send flowers to the Bartusek family.