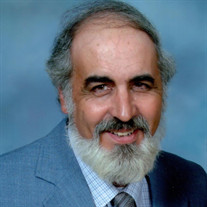 Lynn Adrian Balek, 77, died unexpectedly on Friday May 27, 2022 at home. A Mass of Christian Burial will be held 10:30am Friday, June 3, 2022 at Epiphany Parish-St. Joseph Catholic Church, 302 5th St SE, Mason City, IA, with Rev. Neil Manternach as Celebrant. Military Honors will be held following the Mass. Visitation will be from 5:00pm to 7:00pm Thursday, June 2, 2022 at Hogan-Bremer-Moore Colonial Chapel, 126 3rd St NE, Mason City, IA. A time for sharing will begin at 7:00pm. In lieu of flowers and customary remembrances, memorials may be left in Lynn's honor to a charity of your choosing. Lynn was born on March 13, 1945, the son of Merrill and Lucille (Snipps) Balek of Mason City, IA. He was a graduate of Newman High School Class of 1963. He enlisted in the Navy Reserves and was serving during the Vietnam War on a tugboat. On June 22, 1968, Lynn married Patricia Wihlm in Pearl Harbor, Hawaii. Together the couple had three daughters. Lynn worked with his father on the railroad and eventually began running Balek Brother’s Performance with his brother Larry. He continued the business up until his passing. His love of Mopars and Drag Racing carried him throughout his life affording him the opportunity to travel the Country. Beginning at a young age he taught himself how to build engines, and eventually became very well known and respected in the Drag Racing Community. You would never find Lynn without his 50s and 60s music playing, his Mopar hat on his head and the Hemi in his heart. From his love of the St. Louis Cardinal’s to the History Channel, Old Movies, and Mobster Shows he always would and could quiz you on random trivia. Those left to cherish memories of Lynn are his wife of 54 years, Pat Balek; daughters, Dawn Balek of Des Moines, IA, Cheri Balek of Mason City, IA, Ann Balek and Mike Fenton of Eugene, OR; siblings, David Balek, Larry (Sue) Balek, Terry (Mary) Balek, Mary Magaret (Leroy) Ries, Sr. Michelle Balek, Martin Balek, Jerry (Natalie) Balek, and Lorriane (Dennis) Beeson; as well as multiple nieces and nephews. Lynn is preceded in death by his parents; his wife’s parents; nephews, Daniel, Jay, and Michael.

The family of Lynn Adrian Balek created this Life Tributes page to make it easy to share your memories.

Send flowers to the Balek family.