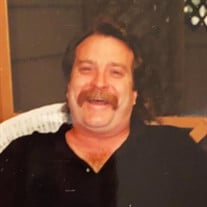 Lyle Arthur Anfang, 63, peacefully passed away Saturday, April 24, 2021 in Mason City, IA. A Celebration of Life will be held at the farm (2258 240th St Dougherty, IA 50433) where Lyle lived with his children and grandchildren on Saturday, June 12, 2021 at 2:00 p.m. Lyle was born on July 17, 1957 in Watonwan County, MN. He was lovingly adopted and raised by his parents, Art and Elaine Anfang in Woodbury, MN, and was a true Mama’s boy; adoring everything about her. Lyle was a graduate of Park High School, Cottage Grove, MN. He and his sister, Lynette, went on many fun adventures with their cousins Randy, Mark, and Shelly, and those days made for great storytelling as an adult for Lyle. Lyle was a character in high school and enjoyed keeping people on their toes with his sharp wit and unending sarcasm, which he inherited from his Dad, Art. Lyle married the love of his life, Patricia Jean McGarthwaite on June 16, 1979 in St Paul, MN. He and Patty raised two children together and loved to not only watch their kids play sports but also loved to coach their teams. They spent many years playing softball together themselves. Rarely seen without each other Lyle and Patty shared an extraordinary love and marriage while living a beautiful ordinary life of cabin trips, barbeques, North Shore vacations, and a shared love of 1970's music that has now been ingrained into their children. Lyle always carried a soft spot for his niece, Lisa Blahoski, who he saw more as a daughter than a sassy niece that came as a package deal when he and Patty married. Lyle enjoyed watching wrestling with his son, Arthur, and having long talks about how well the Minnesota Twins were doing, both always convinced that year would be the Twins' year. Lyle spent many nights sitting with his son-in-law, Nick, watching football, basketball, and any action movies they could find. He and his daughter, Alex, were two peas in a pod, loving to read their annual Lord Of The Rings tradition, laughing and talking about the world and history. Lyle was absolutely smitten with all of his grandchildren. There were many days of Blue's Clues and spaghetti binging with his eldest, Madey aka “Papa’s Peanut”. Lyle shared a love of good food and sarcastic one liners with Izzy, was often found napping with Cecelia, gave an appreciation of Scooby Doo and Looney Tunes to his grandson Patrick, and completely adored Elaine, aka Little, whom he shared many days of relaxation and joke telling with. Above all things though, Lyle loved Patty and she was his absolute everything. Anything he did, he did for her and now once again they are together. Lyle and Patty could be having the biggest adventure or just sitting together and they were completely satisfied as long as they were side by side. Lyle is survived by his children Arthur Anfang of Brooklyn Center, MN; Alexandra (Nick) Wessling of Dougherty, IA; his sister Lynette (Jeff) Smith of Port Orchard, WA; five grandchildren, Madelyn, Izabella, Cecelia, Patrick, and Elaine; and his, Bulldog Peach. He was preceded in death by his beloved wife, Patricia and his parents, Arthur and Elaine Anfang.

Lyle Arthur Anfang, 63, peacefully passed away Saturday, April 24, 2021 in Mason City, IA. A Celebration of Life will be held at the farm (2258 240th St Dougherty, IA 50433) where Lyle lived with his children and grandchildren on Saturday,... View Obituary & Service Information

The family of Lyle Arthur Anfang created this Life Tributes page to make it easy to share your memories.

Send flowers to the Anfang family.